My journal entries are very raw and frank that is why while I used to share my journaling openly, I’ve opted to blur the journaling this time around. I’ve also used my entries to encourage myself to move forward and be more optimistic. For the most part, it’s a continuing effort. But at the end of the day, just seeing the entries that are already done gives me a sense of accomplishment. To me, it’s a very concrete manifestation of physically moving forward which helps me motivation-wise.

Here’s a layout that I rendered by doing layers of text. First, there’s a highlighter background rendering of the lyrics of a favorite song of mine by Rupert Holmes, “Touch and Go”.

There are two main lines here (totally unrelated to the song) but they are really visible only when you look closely it have the book in your hands.

On the left is the title of this post: “Life isn’t fair but God is.”

Then under the main journal entry which I wrote using a black fine sharpie, I write “It will get better.” 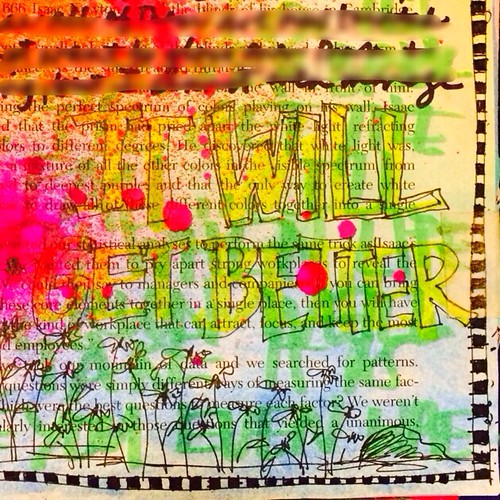 It’s very busy but that was the whole point of layering the texts with minimal drawings. I had started doodling these type of flower scribbles when I was in high school and haven’t really used them in any layout so I did on this one.

This is how it end up looking once done:

Til the next entry..

This has got to be the longest winter yet, not because it is literally long but because the snow just keeps coming. What’s worse is that it’s been so cold that not only are we accumulating snow because it has been coming storm after storm after storm, but because we haven’t had high enough temperatures to allow the previous storm’s snow to melt.

Friday was the worst because we already had inches of snow that got a foot more over a 36 hour period. I wasn’t surprised that the car service company told me they weren’t taking reservations and couldn’t promise they would have anything by the time I needed it to bring Angelo to school and get dropped off at the bus stop.

Oh, and did I mention I had helped him make a newspaper project which we had to bring to school this same morning?

For all of you who like snow, I agree that it looks beautiful when it’s freshly fallen and you see all the undisturbed white. But then it changes when you have to walk on it, snowboots or no snowboots.

It was just beautiful and quite a relief to see blue skies above for a change.  We’ve been having grey and muggy skies of late and it helps when the sun is out in full force.  Not only does it lift your spirits up but it helps to temper the cold on the ground.

This even as the sun was just rising at a few minutes past 8am.  I walk past this bike path in a park behind my son’s school to the nearer bus stop.  It meant moving two stops back, but I couldn’t risk the icy and slushy walk to the one I usually take.  I figured it was easier to go this way.

Every time I walk through this path, I can’t help but take pictures of this patch of trees — green in the spring and the summer, fiery during the changing of the colors of fall, and bare yet elegant in the winter months.

Layered and all bundled up, I walked with my gloves and I trudged through the snow.  There were little things that had fallen after the storm and nestled snuggly into this soft bed of white.

Part of the walk still had undisturbed snow.  I had to take a picture before my trail marred this undisturbed carpet of white.  This is a normally flat sidewalk with grass on either side, but the previous week’s snow was a few inches high, and both the walk and the sides got a generous snowfall that made it look like there was a foot-tall embakment.

And finally I crossed the highway to my stop.  This is an eerie shot of the sun continuing to rise behind another thick cover of bare trees in the foreground.  Still I cannot help but keep taking shots although I’ve done this many times.  The concrete is glistening with melting snow.  It looks like it just rained but that’s actually the ice melting away.  Slow, though, it may be.

I can’t believe they’re saying we’re going to get some snow today.  Yesterday’s skies were prettier — now all I have is another shade of grey above.  We’re home sitting warm and toasty — the thing with snow and rain is it warms the atmosphere up, save for the natural cold that you feel from snow still on the ground.  (Imagine how dry ice cools something in your cooler.)

Winter is a photographer’s dream come true but it stops being a pleasant one once you try and go about your normal day with the snow all around you.  I got into the city eventually.  The snow is not as beautiful as it is down there because they plow the roads quicker, and the sidewalks are cleared faster.  (There is a law that property owners must take care of the public spaces around them within four hours from the end of a snowstorm.)

No more snow, please.  Keeping my fingers crossed I get my wish.