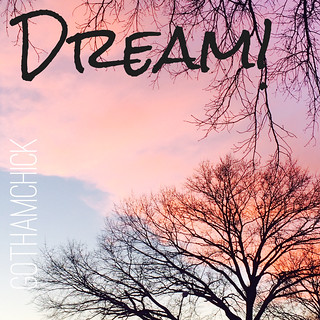 This post is inspired by an e-mail I received from a lady who is thinking of pursuing a career in law and currently trying to get into law school in the Philippines.  Her e-mail has inspired a half dozen possible posts, but let’s begin where the pursuit starts:  a dream.

When I was a little girl, I wanted to be a doctor.  I liked the idea of wearing that thing-a-ma-jig (stethoscope) around my neck, and seeing my doctor come into this colorful examination room bedecked with cartoon character mobiles and murals.  (My pediatrician was the late and great Dra. Fe Del Mundo.)  I didn’t like all doctors, though, particularly this one who lived near us and who was always taking out those glass syringes and long menacing steel needles.  But I liked the sound of “Doctora”.

Then certain life experiences, innocent though they may be, convinced me that that wasn’t the path for me.  I have written about most of them.  (Gag alert)  One was my experience holding my mom’s tonsils floating in liquid in a plastic bag after her tonsilectomy — it literally made me feel my stomach turn but thankfully, the gag reflex was easier to control.  Second was my waterloo being Math.  And I think I haven’t mentioned how one time I ventured into the kitchen to try to slice through a slab of pork, just feeling the knife slicing through the meat sort of sent the wrong sensations up my spine.  End of the dream.

But one thing that made me shift my sights on the legal profession in my younger years was I realized I loved to write, I had the gift of gab, and I liked the looks of those lawyers parlaying their skills as defenders in court.  (Little did I know that they didn’t speak Tagalog at all in court.. everything was translated.  That was all for drama.)

We nurture all sorts of dreams in our hearts. I nurture dreams big and small, simple and profound, achievable and impossible.  Even now at 48.

I also dream of maybe having the time and the energy to devote to my creative pursuits.  So many beads to make things out of.. so little time to sit and try.

I can go on and on and on, but that is a project for another day.  It’s a dream in my heart and in my mind.

Not all dreams are nurtured early on.  Some of them come at the spur of the moment.  It’s like a lightbulb that pops up at the weirdest of hours.  Like most things in life, dreams are fanciful enough for us to take seriously or dismiss with flip of the hand.  But if we choose not to ignore it, no dream is too late pursue wherever we may be in life.

Not even entering law school.

There are many lawyers or lawyers-in-waiting (those who cannot seem to pass the Bar exams despite multiple tries but who have not given up — kudos!) who pursued that dream very much later in life.  When I took the Bar myself, there were people in the same room who were old enough to be my mom.  Yet they were there feeling as nervous as we young ones (then) were.  When you take the bar exams, you are thrown into a new room for each of the four Sundays.  You don’t know who is going to sit next to you, and often, there’s a lot of small talk and nervous chatter between exams as we await the beginning of each one.  I have been lucky enough to have taken it only once, and during the first Bar Exams held in the premises of De La Salle University on Taft Avenue at that so we had airconditioned rooms and all.  But seeing that collective laboring through the travails of trying to make it through the four Sundays gave me added courage that I needed to believe in myself.  If they can make it, I can make it.  I felt one with them — we were all dreaming the same dream.

So my reader Evelyn tells me that she doesn’t even know why she wants to be a lawyer when deep in her heart she is a businesswoman with a flourishing printing press.  (Wow.)  To which I say, what’s stopping you?  Being in law school, finishing it, taking the Bar Exams and passing it may not be needed in your printing press business, but believe me, it won’t hurt to have that added knowledge.  You’d be drafting your own contracts instead of going to someone else (and paying them for it) and maybe even notarizing those documents yourself.  You will know your rights and the nuances of contracts, taxation and corporation law in relation to your business.  But that’s not even the crux of why I think you should go ahead and give it a shot.

Going after your dream is living your life as you want it.  It’s like a lifestyle choice — you can be whatever and whoever you want to be.  If you have the means like you do thanks to the business you’ve been successfully running, what’s stopping you from pursuing a legal education that so many others pine for but can only dream of for lack of the financial means to do so?  So what if the law school you choose doesn’t choose you!  As you have probably read in previous related posts, I wanted to go to UP but they didn’t want me.  Because the Ateneo School of Law opened their doors to me, when I passed the Bar, that point went to their passing statistics.  We choose the school we go to based not just on their reputation and their standards, but sometimes we have to go to the school that will accommodate our work schedule, too.  And even if that school that we chose or that accepted us later on decides it wasn’t working out (translated: if you get booted out or dropped), there are other schools.

From the beginning to the end of that journey, it’s you and your dream that will steer you this way or that.

Future posts will deal with the other points you wrote but let’s start at the most important deciding factor of whether you eventually carry “Atty.” before your name some day — dream on, Evelyn.  I say go for it!

Next up, writing, you ask…