I spied these eggs in two locations and decided to go and check it out. Turns out that Faberge is sponsoring The Big Egg Hunt in New York this Easter and I’m hooked!

Over 200 eggs created by both pop and fine artists are on display in various places in the city.  What to do?  Well, first, you have to download the app (Search for BigEggHunt) and register.  View the Map to visit cracked eggs and hunt for hidden eggs.

Share your photos on Twitter and Instagram so that we can share them with others. Use #thebigegghuntny and the individual #’s for the eggs you photograph (the #’s are on the plaques that accompany egg)

So what’s in it for you?  Besides the fun of actually spotting, hunting, photographing and scanning these works of art, there’s a sweepstakes running which might mean your winning one of three top prizes (eggs, of course) worth quite a pretty penny.  (Check them out here.)

These eggs were designed by the likes of Bruce Weber, Julian Schnabel, Carolina Herrera, Peter Beard, Jeff Koons, Tracey Emin,  Zaha Hadid and Ralph Lauren, and are egg shaped masterpieces that will disappear into some private collections once auctioned on April 22 at Sotheby’s.  There’s even a roaming “Where’s Waldo” egg each day, or simply just enjoy the sp-egg-tacular display as you walk around the city finding as many eggs as you can.

This is 100% for charity and I just snapped up some postcards from their shop  which I was iffy about trying to look for in one of the pop-up stores or at Saks Fifth Avenue, lest they run out!  There’s even a Big Egg Book (which I’d like to see before I buy), but I’m all in for the fun of it.  There’s actually an egg by Chorboogie right behind my building which is the first egg I cracked. 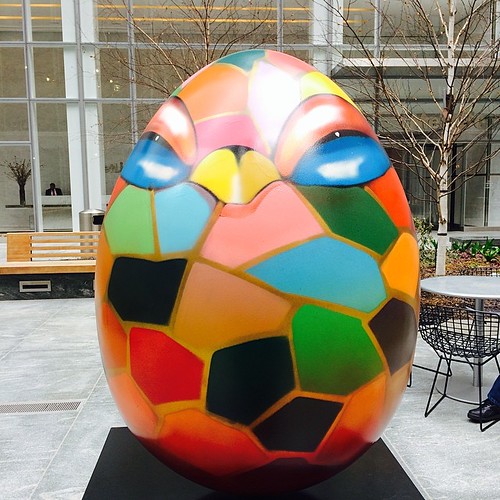 I was trying to rush home from an appointment on West 21st when I chanced upon a group of these eggs over at the Flat Iron District before I headed to the subway on 23rd street to take the ride home. 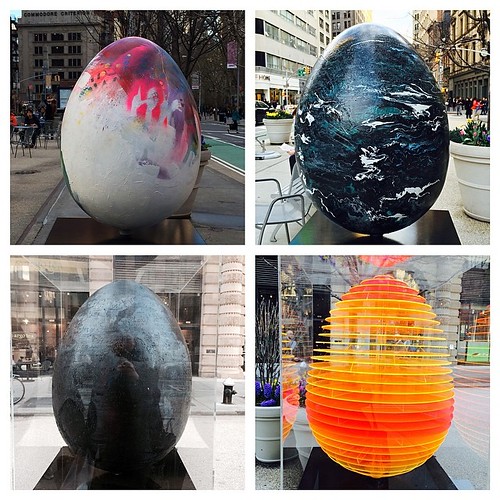 And here’s an interesting composition of texture and color which almost invites you to touch it, more so since it’s simply mounted on a stand and not encased in glass:  #egg256: the Rosenblum Egg. 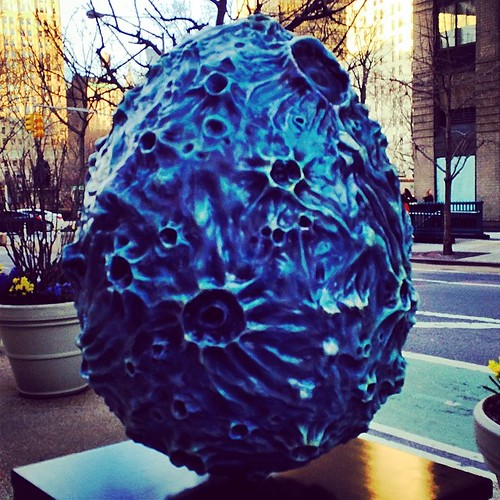 As you will see,  some of the eggs are in a glass case, others are free standing.  Join the hunt before all the eggs are put on display at the Rockefeller Center on April 18 which should make for another great photo opp for those of you visiting New York City until the Auction on the 22nd.  Check out the Terms & Conditions here and who knows?  You might end up having one of the smaller but more sparkly (as in diamond-encrusted) Faberge eggs to wear around your neck.

PS:  As I hit “Publish”, WordPress just told me I had published my 2400th post.  Wow. Have I been yapping here that long?  Or that much?  I guess by some accounts, that isn’t quite that impressive, but to have kept this blog going when other similar attempts to write other blogs fizzled away is a personal feat.

And the journey continues.. with this post and the posts that will follow… not necessarily about more eggs. (HA!)

It’s almost midnight and I’m exhausted.  I think the almost hour-long workouts zap me of energy because my body isn’t used to exerting itself.  I had hoped to work on my agate coin beads.  I guess not.  My trainer told me to listen to my body and just rest when it say “I’m tired.”  So goodnight, everyone.  Here’s to my 2,400th entry in this blog written by and for me. =)