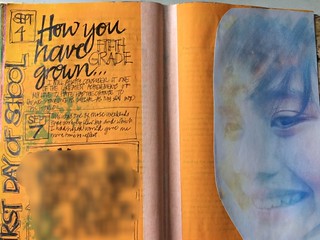 This really started just as another spread painted in one color, and while I sometimes edit the background before starting to write, this layout needed major first aid with the pages falling apart from each other.  Masking tape to the rescue.  Of course, I wouldn’t leave it just like that, but I wanted to keep journaling instead of editing the page before writing.

The cut out of Angelo’s picture on the right came later, as well, as it’s a new picture of him taken during the first day of school. 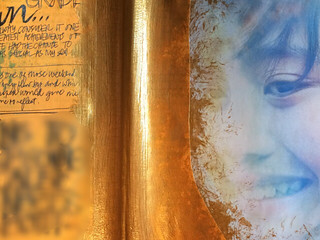 Gold was my color of choice which I brushed on top of the masking tape and sort of “splattered” with the brush on the edges of the photo.  (Angelo was complaining about my doing that, but I told him it was to create a certain effect in the layout.)  I like how acrylic paint easily covers and adheres to masking tape although I think the drying time is a little longer than doing it just on plain paper.

I like acrylic over masking tape as a writing surface, though, as the pen glides through it nicely and it absorbs the ink just the same way. 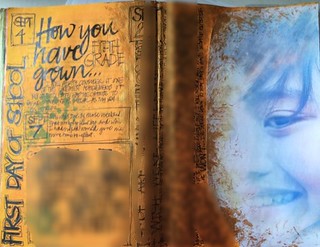 So here’s the final page, with the entry written in another text direction.  I like doing that to separate the days when a spread accommodates several days.  I hate leaving blank spaces in my journal.

My journals are not quite as artistic or fantastic as most other art journals that make even me drool for its color and impact.  I am working with an altered book which in itself is still a work in progress, and I am enjoying creating layouts to later embellish or write on.  It is also different writing on a page you had created yourself instead of  being confined to plain journal pages.  Luckily, I am many weeks ahead of the actual journaling as far as the altered book is concerned, so I can choose to stick with plain journal entries (simply writing them) or embellish already existing backgrounds.

Some art journalers prefer to start from scratch and create the page, but it’s the writing more than the art that really draws me to the project, so I tend to be very text heavy instead of just “representative” of what I am feeling or thinking about in the art journal.

As they say, to each his own.  This is my journal, after all.