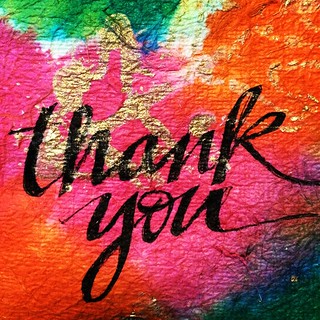 I have been trying to sit here and finish a post to welcome the new year, but I have been lazy throughout the holidays and have been writing in stops and starts.  Now the rendering of word art, however, has been a bit easier, and I have three to four works in progress I hope to finish today.

I needed a new ‘THANK YOU’ graphic and I suddenly remembered I had this gorgeous handmade paper from the Philippines which I had bought some years back which I still have half a sheet of.  Sometimes you just have one of those things you keep saving, and before you know it, they are no longer the same or are not of any use as you had originally meant to keep them.

I am trying to get into 2015, but things keep pulling me back to 2014.. so like most things, let’s do baby steps and say thanks to the year just passed, and say hello to the new one that has just begun.

I’d like to save my “Thank you, 2014” post for the “other” blog where all my thank you’s are meant to be posted.  (It has been languishing in limbo the last half of 2014, but I promise to jump start it before January is over!)

For starters, here’s a list (not of resolutions that we end up breaking anyway!) of things I hope to do in 2015.  For brevity and to make my life a little simpler and the goals more achievable, I’m keeping it short.  No write ups, just a list.. and let’s see how I get on with this as the year goes.  (I just found my 14 for 2014 list, but that’s another blog post altogether.)

1.  Read six books (one every two months should be doable)

2. Take a trip to visit old girlfriends from SPCP/SPCQC — on my own — so that’s either Boston or California.

3. Do another craft fair and learn new techniques.  (Visit one, not sell in one.)

4. Take my little guy to ComicCon 2015.  (A request that was made just today and which Mommy committed to make happen.. note to self: buy tickets early!)

5. Take at least one actual class beyond online.  (Yes, Elaine.)

7.  Watch at least 1 play or musicale on Broadway.  (Yes, it’s just a hop, skip and a jump away from where I work and I didn’t watch any last year.)

8.  Go to the gym at least once a week — and maybe even earn a locker!  (Go 10x the previous month and you get YOUR OWN LOCKER the following month.)

10. Tweet/Instagram at least one positive thought every week.  (I thought “everyday” would be too big a commitment to make.)

12. Spend a Saturday a month, on my own,just roaming NYC or some other place nearby.  (Do something “only in New York”..)

13. Leave one preloved book out in the open once a month for someone else to enjoy/read.

14. Destash: Give 5 items away from my current stash (clothes, books, art supplies, postcards) every month.

15. Write one letter long-hand every month.

So let’s see where this list goes.  I just went over last year’s list and I don’t think I did too bad against that one.  But as I said, I’ll get to that in another post.

Happy new year, everyone.. Let’s try to make this a “happy” one, indeed, whatever “happy” may be for each of you out there.