Monday Musings are snippets of what’s going on in my mind as the week begins.  It’s not meant to be a coherent post.  It’s mostly a list for my own consumption.

Yes, the snow did come!  We had snow last night and the weathermen didn’t disappoint this time.  I sense they are being modest with their forecasts because of the brouhaha over last week’s “over-forcecasting of x feet of snow”.  Really.  I can’t understand why people are complaining that we didn’t get buried in what was being broadcast as one of the worst snowstorms in New York history.  Me, I’m just grateful that it was what it was.  I got a snow day which I didn’t mind at all — even if it meant being cooped up at home.  I still don’t like the “after” — slush and ice but it warmed up quickly enough that I didn’t have to worry too much about slipping as I walked outside.

Today’s snow is mixed with rain, though, so while back home in Manila, people would think of that as something akin to the snowcone (which is like our Italian Ice here in New York), what actually happens is a sheet of ice forms being that temperatures dip mixing the ice and the rain, instead of the rain melting the snow.  Perfect equation for Dinna slipping on her way home.  (Fingers crossed!) 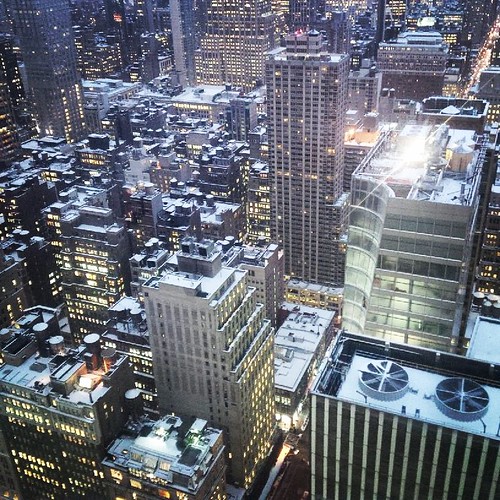 Creating again.  I stayed home all weekend, most of the time with my fleece blanket keeping me warm on the living room sofa.  I didn’t really nap — I think.  Not much.  I also managed to do more than just journaling — I did backgrounds.  What’s more, I created this pendant from a fancy half strand of Rose Quartz faceted nuggets, and one of five fancy cut pink quartz puffed square beads I bought ages ago for quite a price, but had no idea what I would do with it.  Angelo was amazed at what I came up with in what he thought was such a short period of time (only half the afternoon, thank you) — but the truth of it is, it took me around 4 attempts until I was happy enough not to cut the wire and disassemble the piece to try again.

I need to get used to my pliers again and find my wire.  (I only found the gauge 30 artistic wire which was too thin and I didn’t want to crochet wire this time. It took me awhile to decide between the gauge 22 and 24.  I finally settled on the latter.)

I needed the creative outlet because I was deep into a document that was being thrown back and forth, and which, for all it’s simplicity, was giving me the biggest throbbing headache I hadn’t known in more than a year.  (Yes, the ghosts of unresolved dilemmas from that far back can come back with a vengeance that not even Aleve can help me with.)  I could’ve gone on and on but Sunday afternoon saw me deciding to postpone it and give my tired mind (and heart) a break.  I wrote back that I will give a response this week.  The world will not stop turning, waiting for my reply.  I have one all written up, but it was too snarky and might muddle the peace process.

That’s when I decided I was going to make myself a Rose Quartz Pendant I’ve aptly named “Heal my Heart.”  (Note to self: post about the piece in the other blog.) 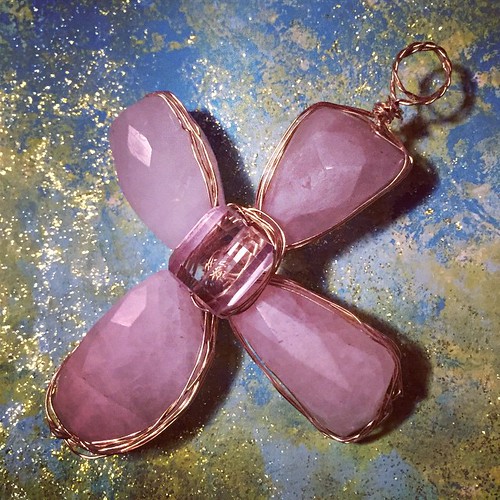 I’m beginning to miss Target.  I usually go there every other week.  I’m going to miss going there for a bit because I don’t drive.  I remember Lou telling me there will always be cabs and other ways to go –if I need to go — until the little tyke is big enough to drive me.  And yes, there’s Target online, after all.  It won’t let me go through the make up and all (which is a favorite to-do.. what’s the latest shade, latest product.. let me get that one, and that one!), but when you really think about it — I can always go to the local neighborhood drugstore and pick up my stash from there — at least the ones I don’t get from the department stores.  And let’s not forget Sephora which is everywhere around me in the city.

As for Michael’s, thankfully, there’s one nearby that I can commute to.. even closer than the one in the city that is commutable from work.  I will survive.. “for as long as I know how to love, I know I’ll stay alive… ” .. Okay, enough of the singing.  The rain is bad as it is. LOL

I need to seriously diet again.  Luckily, I haven’t gained weight.  The sad thing is, I haven’t lost any beyond the half pound I gain and lose depending on how much chocolate I ate.  I have to get serious about this because the wedding is in April, and I am slated to buy my gown, in say, 6 weeks.  (I’m going to be a Ninang to the groom who is my godson in baptism.  A favorite one, at that!)

I’m so excited about this trip home for many reasons, primarily because it’s my birthday gift to myself.  (Jumping up and down for joy!)  And like Ces had told me last year, if I ever need loving, all I needed to do was go home because there was a whole lot of that back there from her and from the family.  I can’t wait.  Even if my last trip home was just December 2013, it seems like it’s been forever and a day.

But back to the weight loss saga, it’s a toss up between seriously plunging into the crash phase of The Dukan Diet: 2 Steps to Lose the Weight, 2 Steps to Keep It Off Forever

(again) which has worked for me (lost two sizes and its the same diet that is helping me not gain any weight..) or do this new program about doing 21-day cycles.  (Purchase plus commitment to do 30-minute workouts daily.  Might work..)

TO MAKE YOU FEEL MY LOVE: Notes, Chords and all.  Yes, I did it.  Just bought it from Music Notes today…  Then I had to think about whether or not I would transpose to a lower key which, after whispering the song in the lowest possible volume to myself in 2 keys higher than the original and one key lower, I realize is the better one to sing to —  hence, the one I should endeavor to study.  Next step, find me a rehearsal studio.  With all the crappy weather this week, I think I’ll target next week for the first hour.. or maybe this weekend.  (I  have a “ME” weekend coming up..)

Of course, I’m no Adele — but she does sing at a relatively lower key that is manageable for trying hard singers like me.  But more than just the singing, I want to PLAY the song!  Lou (from Chicago), is offering me her piano for free.  I WISH!!!!  I would gladly take that off your hands, if I could, but getting that from there to here would be such a herculean task that I will have to pass up on the offer.  (SADLY.)

First Monday of February.  Where did January go?  I’m actually grateful that the month has passed.  It makes me feel like I’m actually moving forward.  Maybe it’s just because I’m in the middle of something I’ve been told will take a tad longer than I would want to give it time to be completed.. but that is beyond my control.  The passing of the months is actually comforting, because then, the longer period of time I’ve been told to expect will be done in no time at all.  Patience, Dinna — I tell myself.  It has never been one of my stronger suits.

Compassion comes from the strangest of places.  I had a talk with a lady who, in her professional capacity, gives out compassion in buckets every single day.  I tried to be cool and collected, laughing through her inquiries, and yet trying to let her know I’m really at a loss as to what I’m supposed to do.  I spoke, she listened.  Then in a very calm way, she told me I should take care of me.

She gave me her professional opinion.  Again, I listened.  And I stood calmly, clutching my phone to my ear, and my mind to my heart.

“It is important that you take care of yourself,” she said.   Hearing that from someone I only knew professionally, somehow felt like a warm hug to the heart — on this day when I am trying to bundle up against the cold of winter, and when I am trying to find my balance as the road starts to get uneven and steep, those words came like the crutch I needed.

Time to brave the cold.  Bundle up, New York! 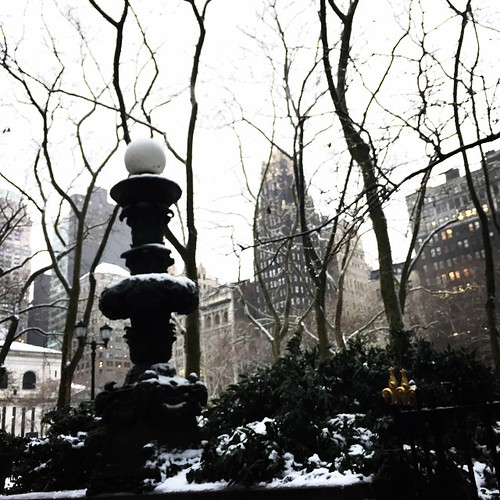