I’ve been cooped up in the house all weekend because I’ve been feeling under the weather.  I haven’t really had the energy to do anything much so I’ve been doing a lot of thinking,

What am I going to wear on Monday?  Very profound question and unusual considering I usually don’t plan my wardrobe ahead.  Do I wear a skirt?  Which one?  Which pair of boots?  Or do I stick with leggings given it snowed so much today?  I’m still at a loss.

Restaurant week’s still on?  A friend just mentioned it and is asking to meet up near the office to take advantage.  Why not?  Wait, I’m doing shakes for lunch.. Hmmmm.. That’ll mean a shake for dinner, I guess.. 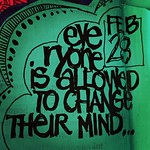 Changed your mind?  That’s a question to the universe.  It seems a lot of parts appeared to be moving in one direction last week and -are now moving in the opposite direction. You can’t fight the tide, so me, I go with the flow.  And I just listen for word in the silence.  I guess when you don’t hear the universe speak, you just brace for the worst.  Then you accept it for what it is, and you move on.

It might also just be a question waiting for an answer.