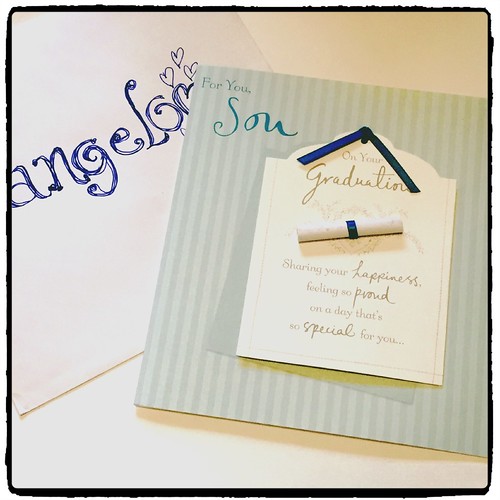 I started writing this Saturday morning but never got to finish it until the whole day ended and moved on to Sunday.  It was a jampacked half of the weekend which didn’t turn out as bad as I was afraid it will be. My little guy just graduated from fifth grade (yay!) and had a graduation party at a bounce place.  It was quite the no-frills celebration which only required a reservation and invitations a couple of weeks ago. Unlike his first two parties at this bounce venue, I didn’t have to worry about giveaways or hitting the minimum this time around.  We hit it well before today but way after the deadline.  (Note to parents out there: Please put yourselves in the shoes of the parent waiting for you to confirm your child’s attendance.  It CAN be nerve-wracking thinking the party might turn out to be a dud so please meet the RSVP deadline promptly.)

I also had to get him ready for a long vacation in Manila.  Father and son go first and I pick him up on the tail end.  I’ve been to Manila this year so the trip isn’t really for me.  I just think it’s time we gave him what he’s always been asking for — a homework-free, longer stay with his cousins.  Forget that it isn’t summer in the Philippine right now, so they’re all going to school.  As long as he doesn’t get a homework packet like he normally does when we leave at Christmas time (because we take him out a week or so before school officially ends for the holidays), he can look forward to just bumming around and enjoying his parents’ land of birth.

He’s grown so much that I am good with having him away THAT long.  I think with all that’s been happening on this end, we can both use a little break and time to grow and shift gears.  And when he returns for middle school, we will both be ready to move on.

We’ve gone on so many trips and with only one guy tagging along, I think I’ve got packing down to a science.  The only difference is I won’t be there, but I’m not worried because after his Dad returns to New York after the first two weeks, he will be with my brother and his family, my sister and other brother and mom.  Being an only son, they are the family he looks to for his ‘brother’ and ‘sisters’.  There he is a younger sibling with an “Ate Julia” and “Kuya Angel” to two others.  (“Ate” and “Kuya” are terms of respect for older relations, the former being feminine, and the latter, masculine.)  I am hoping he can pick up some Tagalog, and I’m tasking my sister who used to be a teacher to teach him cursive.  (Don’t get me started on that one!)

Medication (mostly first aid) ready.  Ear thermometer which is as old as he is, packed with the extra plastic covers.  Ointments?  Butt cream?  (Ewe…. hey, we need to be ready for ANY eventuality..)  Wipes?  they can get them there.. Dramamine?  (His dad’s taking care of that.)  He’s refusing to bring his seasick bands which is him growing up, I guess.  (I will pack them anyway.)  Snacks?  I think I have that covered.

It doesn’t help that my little guy is the pickiest of eaters, but I’m hoping that his newfound curiosity about food will make him more adventurous.  He is asking more and more what it is that I am eating, although he isn’t quite as brave to try it as often as I wish he would.  But at least the curiosity is there.. baby steps, I tell myself.

Saying goodbye was not quite as run-of-the-mill like most of our partings.  I knew he was holding back the tears, but the big boy that he now is, he just kept the hugs short enough to make it meaningful without giving the tears a chance to make the appearance.  My boy is growing up indeed… sometimes it’s hard for a mother to keep up, but we eventually catch up.