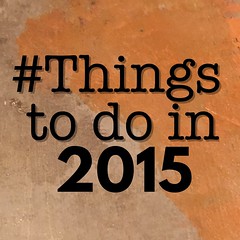 After the August check in which followed the one  in March (the first quarter), I thought it was about time I gave an update about the list of 2015 “to dos” I had made in the beginning of the year. With 2015 almost ended, I am not going to kill myself over the things I didn’t get to do, but will at least try and move that to 2016.  (Me procrastinating again!)

1.  Read six books. – Don’t shoot me.  I’m on my 2nd book, but hope to make it to the 6th before the year ends..  I know this should be easy, but it hasn’t been.  It hasn’t been for lack of books to read — it’s just that finding the time can be such a challenge.

2. Take a trip to visit old girlfriends from SPCP/SPCQC — on my own — so that’s either Boston or California. – Boston, I am still hopeful about.  California is out of the question now, although I got a last minute invite to join my friend Peter in San Francisco.  Never been and had always hoped to go, but the fare and time spent flying to and from would be akin to taking a flight home which is on sale.  The only thing keeping me from jumping on that bargain to spend even just a week in Manila is that I have been home twice this year already, so that means while my Mom would love to see me again, she would kill me for the extravagance.  Ha!

And I did meet up with some fellow Paulinians over dinner in Manhattan which quite the warm hug to the heart.

3. Do another craft fair and learn new techniques.  (Visit one, not sell in one.) – So I missed out on all the nearby craft fairs of Heirloom Productions.  There’s one happening around Christmas time organized by another group but I am still thinking about that.  Been there and done that.. but it’s always a nice experience for crafters like me.

4. Take my little guy to ComicCon 2015.  (Epic fail!) I thought I’d be on top of this but I failed to score the tickets, so no ComicCon this year.  He did get to see Wizard World in Chicago with his Dad, and I alerted them to the WalkCon happening in NJ this December, so the tyke is happy.

8.  Go to the gym at least once a week — and maybe even earn a locker!  (Go 10x the previous month and you get YOUR OWN LOCKER the following month.) – Uhm.. next please.

9. Lose another 10 lbs at least before the year ends.  (Lost over 20 in 2014!) – I’m not going to try to make excuses.  I have managed to lose weight gained in the intervening months — and I am still at my current which is good — but working on breaking the plateau.. hopefully before January now.

10. Tweet/Instagram at least one positive thought every week.  (I thought “everyday” would be too big a commitment to make.) – Very good with this one!

11.  Find a rehearsal studio and actually spend an hour just touching the piano keys again. – Next?

12. Spend a Saturday a month, on my own, just roaming NYC or some other place nearby.  (Do something “only in New York”..) – While I have been spending the weekends at home of late, I’ve been good with the “roaming NYC” bit.  So this one is good..

13. Leave one preloved book out in the open once a month for someone else to enjoy/read. – Soon!

14. Destash: Give 5 items away from my current stash (clothes, books, art supplies, postcards) every month. – The good news is that the items to be given away have been set aside, I haven’t really been good with the giving away except one or two items as I come across them.  I am still trying to figure out the best way to get rid of my unwanted postcards — those not in my current collecting interest of Philippines, New York, Paris, both vintage and modern, lighthouses and maps.  Do I sell them?  Donate them?  Alter them and send off?

The ATCs, I have already decided, will go to some friends back home who are still into ATCs.  Books — I have multiple copies of first editions of a book series I thought I’d invest in.  Still thinking about that one.  And I’m getting rid of some household items which have been hidden in the cupboard or in the attic.  I need the space and I’m sure someone else can use them.. eventually.

15. Write one letter long-hand every month. – While I still need to write one this month, this has been one of the easier ones considering how I love to write letters.  I actually found a Christmas card I had meant to send off a while back but never got to, and I’m hoping to surprise my friend with the early Christmas greeting and a letter to boot.

I’m not feeling particularly victorious with the year almost ended, but I’m not feeling like it was all a waste of effort to even try to come up with the list.  It’s helped me to sort of focus which is good — and I’m hoping to do another list for 2016.  How’d you do with yours?