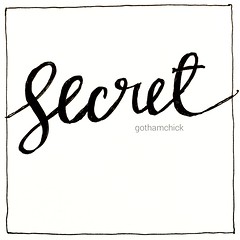 I haven’t participated in the Daily Prompt in a bit, but I’ve had some pingbacks due to some recycled prompts that have appeared in the previous weeks.  I thought I’d give this a stab and then hit publish.

There are times when I feel the urge to write but then I am lost between feelings and questions and ideas racing through my head.  It doesn’t help me to come up with a coherent post, so it’s during those times when I try to calm all that activity in my head by doing something deliberate.  Like writing a post based on the daily prompt.

Today we have a one-word prompt: Secret.

For some reason, the word resonated with me and here I am typing away.  As spontaneous as can be.  Just writing.  For the sake of writing.

We all have parts of us that we want to keep secret from the rest of the world.  I’m not talking about those things that some people who are in our circle of trust know but which the others don’t.  It’s that part of us that only we know about ourselves.

That’s a little difficult for me because I’m basically an open book.  I don’t hide my emotions very well and I tend to be transparent.  What you see is what you get. After everything I’ve been through, any former attempts at civility or propriety have been forgotten when it comes to being brutally honest with how I feel and what I am thinking.  But I have learned to temper that with a more pragmatic approach to things that tend to prick at my persona — I no longer pounce like I used to. I now tend to sit back, let it sink in, maybe let it pass, or slowly formulate a response.  I am not quite as spontaneous like I used to be.

So I no longer get mad or angry as quickly as before.  But I no longer edit myself as much as I used to once I allow myself to react.

And yet I wish that I wasn’t so easy to read or that I wasn’t so forthcoming about things.  There is this part of me that I want to tell the world about, but which I cannot because I have chosen to do that anonymously.  There is a part of my story that I want the world to know, but I cannot write it under my byline nor have it link back to me — at least not for now.  I feel that anonymity will serve me well if I am to write as openly and honestly as I want to.

There I was thinking of the appropriate pseudonym.  Something “me” — yet not easily connected to me.  When I finally found one, I felt like it was a stroke of genius.  It wasn’t obvious on the outset, but then a connection could be made when you saw the name.  I am dying to blurt it out here but I cannot.

That is a part of me that will remain secret for until the time when I feel it is time for it not to be.  I have been struggling to write that secret out, but I have it all structured in my head. It’s like a half finished canvas that I want to unveil but cannot.  At least for now.

It’s that artwork that you wish you can lay claim to, but out of deference to people who matter to me, I cannot.  So if people rave, I will just listen in silence.  Until it’s time to let the secret out.

Sometimes a name can embody more than just an identity.  This one does.  This one will.  And that’s a name that will remain secret until such time that I think I can reveal it.