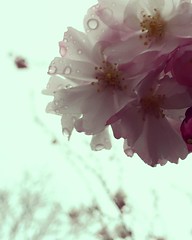 I believe that we all have our own individual voice, and that each one is uniquely and distinctly our own.  We are born with it but are not always in touch with it.  Some even don’t know that it’s there.

It’s that part of us that speaks to the world about who and what we are.  Sadly, sometimes this voice is muted or suppressed and drowned out by other voices around us.

I have always been loud.  As in booming.  While I may seem to be shy at the start, it’s only because I don’t go in announcing myself to the world.  I’m the one you see making her way around the room introducing herself to you and the rest, one at a time.  I can speak to you or the group — and you will hear me very distinctly.  Even in the midst of the collective noise of individual conversations going on in a disjointed chorus, I can raise my voice and halt that chatter to silence.

I was raised to defer to authority, and I would be the one raising her hand to be heard– not the one who just shouts from the back of the room.  When I was growing up, I was fortunate enough to have been encouraged  to find my voice and speak with confidence.  I was taught to not be afraid and to have my voice heard when necessary.

So I learned how to say no when I wasn’t up to agreeing to something.  If I had a contrary opinion, I would not be one to be intimidated for holding an unpopular view and I would make my point heard.  I sold myself as a candidate to crowds of people.  I won speaking competitions and college student council elections.  I confidently made business pitches to sell ideas.  I found my voice both in the audible and physical sense.  You “heard” me even just by “seeing” me.  I wasn’t the flamboyant one, but I stood out as an individual in a crowd.  It wasn’t so much about colors or hairstyles– it was because I walked with a confidence that made people listen when I needed them to.

Yet somewhere along the way, my voice started to fade.  At first, little by little.  Even I didn’t notice it. I didn’t speak up as often, I would just follow other voices.  And then one day my voice just wasn’t me anymore.  I told myself it was me adjusting to my new life.  I didn’t realize, though, that I allowed my voice to be silenced, and I mimicked the voice of another whose approval meant the world to me.

But there is something about suppressing the voice within that eventually sees it struggling to be heard again. Events unfolded and I found myself clearing my throat and searching for that booming sound within.  I never really lost it– I had just let it be buried in the din of others shouting above mine.  I screamed to break free and silence fell, and the collective noise ceased.  When all ears were on me, I declared, “I am back.”

I stopped listening to the voice that tried to mold me into something I wasn’t.  The only voice I listened to was mine, and I had missed that.  I had missed being who I am because I was too busy being someone else.  Lesson learned.

And everyday, I smile as I hear my inner voice telling me, “I am back.”