With the first (almost) full week of classes officially done, I guess you can say we’re back into the swing of things.  From school supplies to new backpacks and the routine of waking up the now seventh grader in the house, I know that summer is over.

Every year we have a ton of paper to fill out, and I just finished doing this year’s batch last night.  It makes me wonder if it won’t be easier for them to just ask if anything in the student’s  information has changed, but I realize now that would mean for missed information and a nightmare keeping up with around a thousand students annually.  Why am I complaining?

Out school supplies now come from each teacher, and while it is easier because you get a shorter list (which doesn’t include crayons or markers anymore, thankfully!), it can be difficult when the major subjects require a separate ring binder each.  I was so reieved to see two ask for composition notebooks instead, and one even asked for just a section of a binder.  Children complaining about back ache is not a good sign and speaks of the load they carry on their still growing spines!  For my part, I try to use the lighter binders to help ease his load. 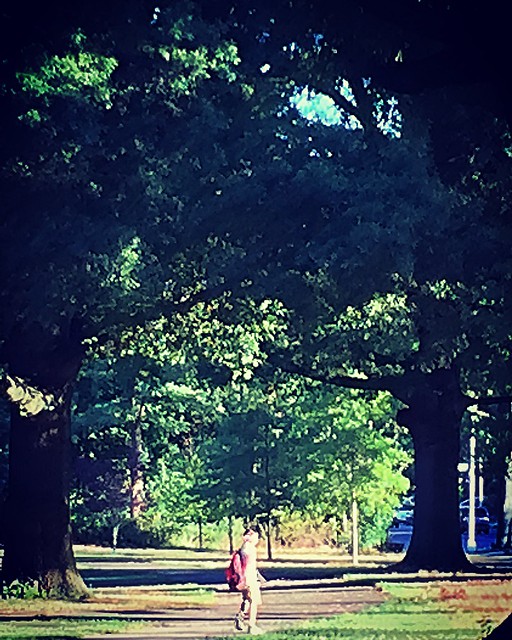 This year, he’s taller and his shoulders are beginning to get broader.  A hint of a moustache is already showing on his upper lip.  His voice cracks when he talks excitedly and now gets pitchy.  At around 5 feet tall, his shoe size is a whopping 9 1/2 and still growing.  (The dad has big feet.). His hands are no longer smaller than mine and I can feel the difference those few times when he reaches out for mine to hold it in his.  Still, I see a hint of “my little boy” in his eyes and voice when he utters “I love you, Mama” ever so affectionately from out of the blue.  I am praying that he never outgrows that part of him.

So the homework routine has started and kickstarting the new school year has been a bit of a challenge but we’re getting there.  Even he is aware that it’s a totally different ball game, and it requires adjusting anew.  There’s the usual check in at the end of the day and the constant reminder to get his backpack ready for school the following morning.  I sound like a broken record reminding him about keeping his keys and his bus pass in his backpack at all times.  Phone always charged 100% ! Turn on the ringer when you get home (!!)  Put away  your socks… and the list goes on and on.

It’s a routine that I both love and cherish for the special bond that brings us even closer.  We have done homework via the phone, facetime, texting and of course, me in the kitchen counter, and him on the dining table.  He knows there’s always the kindle app when he needs a book, and I’m trying to get him used to figuring out homework before calling out to me.

He has grown up.  A lot has changed.  He’s the same that he’s not.  My “tween” is almost a man, but I’d really like to keep him where he’s at for as long as I possibly can,  before I have to start looking up at him when scolding him.

Here’s to another school year.. let’s see what lies ahead.