A full week of silence is not only unacceptable but sad.  I have been trying very hard to be consistent with posting here, but juggling two corners of the web has been a bit of a struggle along with my attempts to keep two Etsy shops going.  I am giving it the effort to get back into a workable rhythm that will allow me to work all this multi-tasking seamlessly, but I haven’t quite settled into it just yet.  Trying.

They said when you don’t know what to write, it helps to revisit old habits and one of the things I’ve missed doing is writing under this banner, and to think it’s one of the easiest things to write about because it is a hodge podge of topics popping in my head as I write.  Anything goes, so they say. 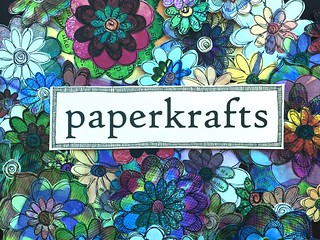 The return to Etsy.  So in the past couple of weeks, I’ve been busy setting up the return of two of my stores.  One has been my longstanding jewelry storefront, and the other, a fleeting foray into paper goods which I am now populating with handmade cards.  That’s GothamChick and PaperKrafts, respectively.

It isn’t all that difficult bringing GothamChick back up and running — primarily because I have the stocks to populate the store with.  PaperKrafts has me creating and posting simultaneously, and while it’s sometimes a mad rush to produce the items, photograph, edit and post, I’m enjoying putting out my handcrafted cards out there for people to hopefully buy and use.  It has also allowed me to revisit and use long forgotten art supplies I’ve had all this time, along with my Paper Flower Garden project I have been just drawing and cutting the last couple of months.

Coming up: Halloween, Thanksgiving, Christmas.  I’m happy and at the same time a bit frazzled by the fact that we are now entering the last quarter of the year.  2017 is just around the corner, and there are three major holidays coming up.

Halloween basically still figures as “major” because the boy is only 12 (and still thinking about a costume) and I live in a neighborhood where trick-or-treating is taken seriously.  Last year, I wore a costume and managed to surprise myself and not just a few trick-or-treaters with what I came up with, and I had vowed to do a costume this year.  After much thought, I think I’ve come up with something acceptable and I really should get started on pulling it together soon.  (Blog post coming.)

Thanksgiving is an “evolving” holiday for my boy and I, given that we are in the midst of a major transition in our lives.  I’m trying to make it low key given that, but it doesn’t mean we will not celebrate.  “How” is the bigger question — but there’s time to figure that one out.

And finally my favorite holiday of the year is coming, and again, during a major transition.  Last year, I promised Angelo we will really decorate this time, and I’m beginning to feel the pressure right now, but this should be a breeze.  I’m all excited just thinking about it!

Those Mondays that make you wish there was a third day to the weekend.  I almost didn’t want to get up until I remembered it was a work day, and I had promised myself I will try to make it to work early.  (Which, of course, didn’t happen despite my best efforts.)  The past week has been a tough one to handle in many respects, and I am really putting in the effort to try and take things as they come, without letting them weigh me down.

So I’m making a major push to get motivated and stay motivated so that I don’t lose my way.

There are just so many things going on in the background and I am trying to stay positive by shutting out the negative or the unknown.  It isn’t easy.  I think it’s human nature to worry and give in to anxiety — even if neither one actually helps us in any way.