So the presents have been sent and exchanged. What special gifts did you get?

As a Starbucks mug collector, the two new mugs that my little guy bought for me are meaningful additions that will have a special place in my collection.

I don’t normally buy mugs unless it’s a new issue or when I chance upon one in my travels, but I spied this gold printed mug at the Starbucks branch I frequent near work. For someone who once received a $200 offer for a Christmas mug I had bought ages ago, I’ve learned to watched out for special holidays issues. It was a regular New York design but in gold print. I bought one and brought it home. The barristas apologized that they didn’t have a small bag, so I had put the boxed mug in my tote and then took it out when I got home.

My little guy comes and sees the box and his face drops. He had apparently bought me one as a Christmas present after being torn between the gold printed mug and the blue “Been There” series. Long story short, I returned my purchase and kept his.

The weekend before my Christmas Eve, he was spending the weekend in Washington DC to watch an NBA game. I had specifically asked that he look and see if he can get me a mug from one of the rest stops along the way. I told him I would pay for it.

I somehow missed his call to give me a choice as there were several available. By the time I returned his call, they were back on the road and he had already gotten the mug — and he refused my offer to pay for it. He said it was another present from him. Two mugs from my baby! 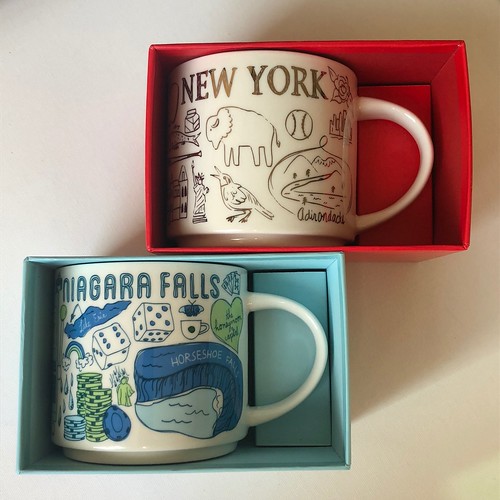 I love the stories behind my mugs, but love the mugs that come from people close to my heart all the more. It adds a special value to the addition — even if only in terms of memories and emotion. Thank you, my dear son!

Sometimes, friends or colleagues who know I collect the mugs surprise me. When people visiting from other places ask me what present or pasalubong I would prefer, I always ask for a Starbucks mug. More so from places not yet represented in my collection. Sometimes though, it’s the giver who makes the mug special, no matter that the mug is a duplicate of something I already have.