It’s been almost two weeks since I started working from home and waking up to the new reality of living the corona virus pandemic. It’s been an experience I’ve wanted to write about since day 1, but first, real work interfered. Thanks to technology, the company I work for was well positioned to operate remotely. My position, assisting one of the chief somethings of a Fortune 500 company, has always been set up to be able to work from home. It wasn’t so much preparedness for a situation like the one we are in right now, but more for those instances when working beyond the regular office hours became necessary.

I’ve been meaning to write, but I know that the stress of the current situation has made it more difficult in terms of getting the words out. But after going full steam into adjusting to the situation, I think I’ve gotten a better grip and have somehow steadied my gait.

I log on to the company system and begin work — dealing with the stream of emails absent the usual calls. Because of the prevailing situation worldwide, work has been busy and my first week was exhausting. You’d think working from home was such a perk, but it takes real effort when you’re trying to do your normal office routine.

I’ve been working off of a smaller laptop screen, and trying to resist working via a regular keyboard. I’ve been vacillating between hooking up an old monitor here at home or ordering a new one. Both options seem to be surrendering to the fact that this is not going to be a situation for the short term, which is probably why I have been resisting it. However, I might soon have to succumb to the reality that my eyes are not taking too kindly to the smaller screen. Just part of the adjustment to the new home office situation.

I’ve been to the grocery three times since — and I’ve had several deliveries from online shopping. Although we keep getting reassured that there is no shortage of basic necessities, there have been empty shelves and less options — but it is heartening to see that the local grocery has been restocking. 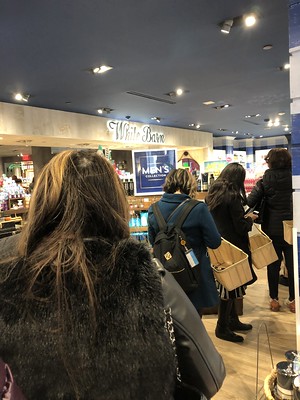 Still, there are many items which have remained out of stock. I fell in line for hand sanitizers in Bath & Body works days before New York Governor Cuomo urged offices in NYC to reduce their office workforce. Their bins were empty when I visited, but I got the tip from the store clerks that a delivery was coming in the following morning. So I went in before heading to the office and I saw the line snaking several times within the store. It took more than half an hour for me to reach the counter. The hand sanitizers retailed for $1.95 but was available for a promo sale of 5 for $8 but only for the first 10 pieces. After that, you had to buy the 11th piece on for regular retail.

I have my own opinion about that whole set up, but I’d rather save it for another post. Like most everyone else, I got more than the 10 pieces — I’m guilty of having bought maybe around 30. I had promised a friend at work I’d grab her 5 if I ever got the chance to. 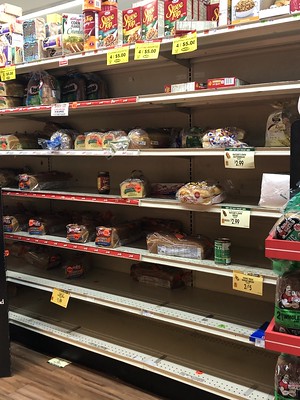 I have a small Keyfood nearby and a Walgreens. Like I said, I’ve gone there probably three times — going there once a week like I would on any normal weekend. I went with disposable gloves, making sure not to touch my face. The toilet paper shelves were empty — but I am pretty good with that for a bit. The fresh produce was well-stocked. It was the meat and poultry section, as well as the bread which was nearing empty. They did restock, but selectively. The grocery shelves, for the most part, didn’t exactly scream normal. It was a stark reminder that things were disappearing from the shelves even if they were being restocked.

My grocery delivery, Freshdirect, has not delivered any meat or poultry that I have ordered the last two times. That’s basically the reason I’ve stepped out to get other things from the local grocery. Despite being a delivery pass member which is supposed to mean I get priority in reserving a delivery slot, the delivery slots have been pushed further and there aren’t really that many choices available. Items that are “available” to put in my “shopping cart” also disappear by the time I check out. I’d like to think that it’s the sheer volume of orders they are receiving that’s caused this, and not exactly because their stocks are running low.

While online retailers continue to be open, most basic stocks have been reduced to being available in store only because of high demand. So cereal is a hit or miss, and even your regular Mac n’ cheese. Forget about bottled water. I am trying not to get too stressed about it but it’s taking a bit of an adjustment. People seem to walk around normally — but there’s a bigger group of people wearing masks now. I didn’t wear any last week, but the numbers have jumped high enough to even make me sew my own masks in that same vein of getting ready, “just in case’.

A friend had procured two n-95 masks for my son and I before we stopped working at the office. I somehow managed to misplace mine but my son’s is here. He hasn’t really been going out except to be with his Dad. I have tried to minimize his being outdoors to the point that I haven’t asked him to do chores — I prefer that I be the one going out, receiving the deliveries and throwing the trash.

Fortunately, there’s only my 15 year old son and I. I am well stocked for his staples, but there’s this nagging feeling that makes me want to keep the stocks I have at this level. So as we consume the food, I feel like I want to keep the pantry stocked as they are. I really have no reason to worry for myself — I have always eaten light, and I have always been dieting one way or the other. I can adjust to what I have on hand. It’s a different thing for my Uber picky teen. So I made sure my rice is stocked, even requesting his father to get us an extra bag of rice when he got one for himself. My son really has a very limited repertoire so I just need to make sure I’m covered for more than two weeks.

So our tiny apartment has been our literal refuge the last two weeks, and from the looks of it, will be our literal four corners for more weeks to come. I am grateful that the New York School systems and his high school in particular, has successfully rolled out online learning. Not quite your usual classes, but there have been videos to watch, school work to read and download and submit. It hasn’t been a total standstill on that front.

When the offices and shops decided to shutter their operations, leaving only essential services open, I couldn’t help but think of the families who depended on the breakfast and lunch offered for free in New York City schools. Governor Cuomo made it known that was one huge consideration in not suspending classes. Fortunately, that has been solved and children are now able to pick up bags with their meals from the schools. I thought of the workers who relied on hourly wages which meant no work, no pay.

I have had difficulty getting to sleep even when the workday saw me drained and exhausted when I finally logged off. I would sometimes end up napping in front of the TV at the end of the day, but when I lay my head to sleep, I would find myself awake well past midnight.

Staying connected with friends and family overseas has been a blessing. I FaceTime with my 80 year old mother more now. We say I love you. I tell her she needs to stay indoors. My son and I were actually planning a weeklong trip home to celebrate her 80th birthday on March 9. We were planning to fly out on March 5 and return on March 15. I kept postponing booking the flight home despite the bargains because the Philippine president was threatening to cut off every avenue I was planning to take to get to and from Manila, and self quarantining was becoming a thing on this side of the world. The biggest threat was being cut off if travel was somehow curtailed between Manila and New York. It turned out to be a good decision to hold off. We will just celebrate whenever we can make it to Manila again, even if it means celebrating in December.

Governor Cuomo’s daily press conferences have been a staple in my calendar. I watch the White House press conferences only because I wait for the reassuring presence of Dr. Fauci. The numbers can be alarming but the truth of it is, other than hunkering down, I really can’t do anything. I am hoping that the other families around me are doing the same, staying home. I’ve seen countless video online of physicians and artists banding together commending the great humanitarian effort from all sides of the world to save as many people as possible. And they fight on, with a simple request from those of us who don’t as yet, need their care — that we stay home.

So I’m trying to do my part. I’m staying home. I’m hoping to ride out this crisis with my fingers crossed and all the prayers sent to heaven, that if we do get affected by it, that it be in a way where we will not need any medical care. That we will be able to ride it out as if it were just a regular cold or bout of flu. I wish.

I’ve rambled on long enough. There are more stories to tell. I am hoping I can keep writing. For now, I have to do my Sunday chores, get ready for the week ahead, and maybe sew another mask or two. I think I’ll have a glass of wine, and maybe have a salad for dinner.

I was thinking of going to the grocery. But I don’t really need to. Not until I see what Freshdirect delivers tomorrow evening. Fingers crossed.. yet again.