New York City is abuzz with the much-anticipated move to Phase II of the reopening, meaning restaurants will now be allowed to do indoor dining, retail stores can now open for actual shopping, and salons and barbershops can open. Yay! I am relieved and almost giggly excited about this.

See, before the pandemic hit New York full steam, I was planning a trip home to Manila to celebrate my Mom’s 85th birthday. For the last two years or so, I have cut my hair once every 3-4 months only. When I’m in Manila, I actually get a haircut there, and I’ve found a hairstylist that I have gone to twice and had planned to get an appointment with this time around as well. Alas, the breakout of the virus in most Asia ports, and the threat of self-quarantining upon return, made me decide to cancel the trip.

So instead, I had made up my mind to have my hairstylist and friend Kelly Park, do my hair as she has the last 14 years or so. I was about to send her a message to make an appointment when the shelter in place order came down from the Governor. And that was that. 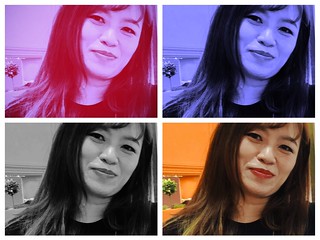 While I do have a couple of reliable hairstylists in different salons, Kelly has been a favorite, so much so that when she left the salon where we found her at, we looked high and low until I found her. She was a Korean and a Christian, and it so happened that the neighborhood nail salon I go to was owned by a nice Korean lady who decorated her salon with religious verses. From out of the blue, one time, I just thought it wouldn’t hurt to ask if she might perhaps know Kelly from Church. Kelly used to tell me that she would do the hair of her co-congregants for presentations, so I knew that her community knew her as a hairstylist. Well, what do you know… Grace from the nail salon knew her and gave me her phone number. She was also a customer and proudly showed me her bob. That was maybe 8 or so years ago, and two salons after, I have her on my contact list.

Today, I thought I’d get a foot in the door and ask for an appointment. I have always loved the way Kelly did my hair, whether or not it was the old short bob like before, or the way she trimmed my hair now that I wear it past my shoulders, and between her Korean English and my attempts at a clear explanation with visual aids, we have had a happy partnership all these years. She and Angelo have a history together as well — with pictures of the two of them when he was 4 or 5, and recently when we went to her to have Angelo’s hair processed. She was so shocked to see how the little boy was little no more.

She told me that the reopening wasn’t 100% sure but asked for my preferred times. I told her I would gladly take time off to go to her. And I will!

Something so routine is now something we long for. Planning for it like a special date and looking forward to it with anticipation. It’s not just seeing her, but actually being able to do something that we haven’t been able to the last 12 weeks. It gives new meaning to the saying that you really don’t know what you have until you lose it. Well, we got it back.. so time to enjoy it and use it!

I can easily have four inches cut off and I really wouldn’t look that much different from my usual style. After years of shunning the short hairstyle I wore for 14 years or so, I am actually seriously thinking of going back.. or not. Maybe I’ll do something halfway.. a little shorter than my usual hairstyle but longer than the one I sported way back when. Or maybe I will just leave it to Kelly to decide.

I am so looking forward to sitting in that chair, PPE and all — and without the customary hug like we used to share. It would be great to see her again. And yes, I will Uber with the windows open, mask on, hand sanitizer ready.

Baby steps to going back to what used to be, even if what we go back to isn’t going to be the same life we lived before the virus took us over.

Life goes on. Yes, even if the Mayor is threatening that we aren’t sure about Phase II happening on Monday. He sounds like the principal threatening the student population with sanctions if we don’t behave and earn the perks. I don’t want to taint this post with the negative — although I am aware of the things that are holding him back. We shall wait and see. And I can’t wait to see Kelly and get that much needed trim. Soon!