I am an Amazon Associate and your clicking on the links in this post and subsequent purchase from Amazon might mean a commission for me.

Despite promising myself I would write this morning, it’s almost 6pm and now is the only time I finally did. No, I haven’t been slaving away doing chores, although I have a had a productive day. I actually have three posts drafted in the last couple of days, but I don’t think any of them are ready to be posted.

The last hour or so has been split between preparing tonight’s adobo dinner and reading up on the news. I am actually proud of myself for fixing my bedroom window and adding some additional buffer against the intense sunlight that peeks through it in the morning. I also went through my ribbon and notions stash and fixed them neatly. I plan to cut a swatch of the contents of each box and paste them outside so I don’t have to open each box to find out what’s in each of them. That will have to wait for later. I have done enough today.

I went over a heap of magazines that I had always intended to read, but they piled up without me fulfilling that promise to myself. So I sat down and set a quota of 5 that I would keep, and the rest are in a pile that I will tie up and bundle to throw in the recycling bin later. I think I have made much progress now that I am able to throw out bundles of magazines. They are way past their time — much like an expiration date in my head. I tell myself that I will never have the time to go through all of them, and they are piling up. I must destash!

It’s a rainy Saturday in my neck of the woods. Nice bedroom weather. I would’ve napped had I not gotten so into fixing that corner of my room. I turned my Audible on and listened to “The Handmaid’s Tale” as I went through my stuff. Later, I lay in bed and read.

No baking or sewing for me today. Maybe later. I’m still debating with myself about opening a bottle of Chardonnay. Should I? I remind myself I’m out of cheese, but the bottle chilling in the fridge might go well with the adobo later.

I have tried to muster the courage to start eating more purposely going forward, as the weighing scale has tipped upwards. (In short, I’m trying to start dieting again.). I’ve even started getting the supplies I need to actually begin the first phase of my usual Dukan Diet. Maybe I just have to stop baking and cooking — and yet, I grabbed some tripe and ox feet from the meat section yesterday in the hopes of cooking some Callos during the week.

I guess we shall see.

Meanwhile, the adobo is done and ready, but the boy isn’t ready to eat yet. I had long ago given up eating rice, but this is one meal you cannot have without. There goes the diet.. well, I haven’t really started mine yet, but I’m getting there. 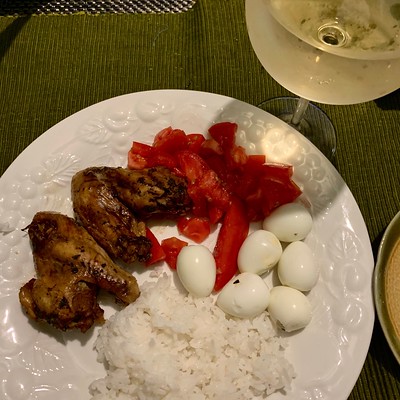