I have always been the laziest person when it comes to exercise. I used to joke that you’d have to pay me to get me to exert effort one way or the other. The thing is, I’ve been trying to find ways and means to stay fit — both mentally and physically — and staying in my safe corner and not doing anything beyond moving about in my small apartment was not going to cut it.

Panic hit me when I realized I was putting on weight with all the baking and cooking and inactivity. I used to clock a decent amount of steps even if it was short of the modest goal of 10,000. I have usually weighed this much only after coming back from a trip from Manila, because of all the delicious food that I couldn’t resist gobbling up.

The diet has always been in the plan, but I knew that if I were to make it work faster and more efficiently, I had to get off my butt and do something about it.

On Monday, I willed myself to don a decent attire to walk. Just walk. I grabbed my phone and tied my hair, put on my mask and off I went. I live in a relatively quiet residential neighborhood where the air is fresh and the streets and sidewalks are clean. There is even a stretch of green in a park just a block away from me.

My first outing saw me walking the long way to the neighborhood grocery. I gave myself a half hour as I did it before dinner, and the clouds were threatening up high. It was nice to actually find myself having the energy and the courage to walk out in public without a determined effort to accomplish any specific task. For the past few weeks, I would only venture out to do the groceries, the laundry, and last week, to get my hair cut.

It felt good. It was pleasantly cool, but by the time I made it to the grocery, my heartbeat was definitely elevated and I felt a light sweat forming on my back. That made me proud. I actually did it! I exercised! I made it to the grocery just in time as it started to drizzle. I picked up some ingredients for a diet soup I wanted to try out, then I walked briskly back before it rained hard.

The next day, I ended work at a decent hour and quickly changed again and walked out the door, this time determined to go to the park a block away. 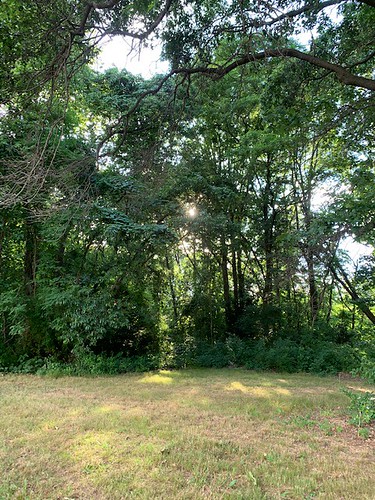 I found a starting point and counted how many steps it took me to go around the path surrounding the field in the middle. There was a decent crowd of others walking either leisurely or jogging / running around. There were some who were walking their dogs, or accompanying children who were biking or having their time in the playground. 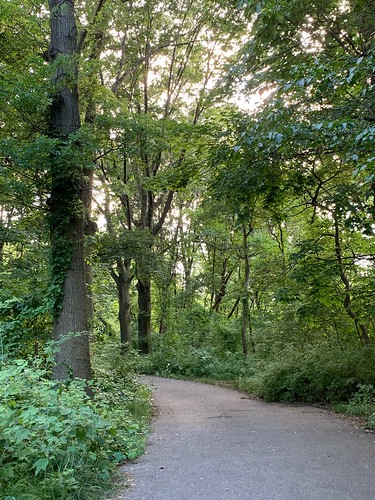 The path around the field was not level which made for some elevation at certain parts — I walked.. determined to keep going as far as I could — and I made it to three rounds. I had the Handmaid’s Tale on Audible keeping me company. I don’t know why I decided I wouldn’t listen to music — that I would instead listen to the book that was in my queue. It was me, myself and I, wrapped up with walking the path and listening to what was on my phone.

As I felt my legs starting to feel the strain, I left the park and I decided to walk further on to a grocery on the other side of the neighborhood to pick up some fruit and non fat milk, and then I walked back home.

Neighbors I met along the way thought I had gone to work since I was lugging a shopping bag. I proudly told them I had been to the park and had just stopped by the grocery on my way home.

I made it to my second day with an hour’s walk. I surprised myself with that accomplishment.

Today, I decided I would try to go in the morning, taking advantage of the fact that I’ve been waking up just after 6am of late because of the earlier sunrise. It took me a while to drag myself out of bed, but I changed and walked out with purpose and headed to the park again. My legs were still achy — but I figured the best way to get rid of the strain was to keep going. More pain! After one round, though, I decided I would combine the routes of the last two days and headed back the long way, looping through several blocks I had not walked previously.

I listened to some podcasts as I had finished the audio book, making a mental note to download my next “read”. I am not really a podcast person, but listening to two episodes of something I picked up from The New York Times, I think I’m going to start exploring more. I am quite late to the game, I know..

The park had a haze and smelled of crisp grass and morning dew. You could hear the birds in the stillness, with a few stragglers here and there making their way around the park like me. I was alone, but not alone. 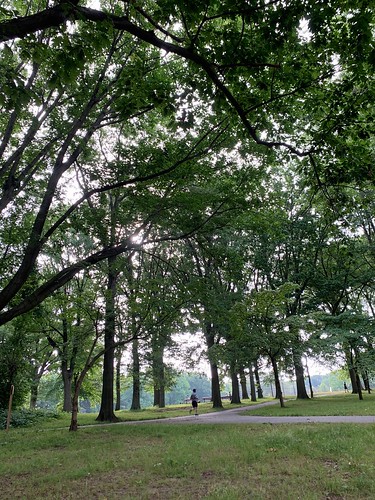 The park benches beckoned, but I couldn’t give in or I would end up sitting there until my time was up, and I wouldn’t have accomplished anything except stare at all that greenery with no steps clocked.

The mask, I have to admit, makes it a little harder to exert effort. But I couldn’t take it off. There were people huffing and puffing ahead of me or heading towards me, and I couldn’t risk it. Plus, the norm nowadays is to give those without masks “the look” — and I would be the last one to invite that air of disdain — so I comply. I actually managed to do it!

Almost an hour this time, as I had to be conscious of making it back home before 9am, so I can log in and begin the day’s work. I thought I deserved a treat and headed to the neighborhood Starbucks. Nitro Cold Brew in hand, I walked home. (All of 70 calories!)

My legs are a bit sore.. but I think I’m feeling better. And what’s more, I feel great. I actually did three days straight — and I’m hoping I keep this up in the next few days.

I like how I know that I’m doing something good for my body, but more so for my mental health. I am “opening up” to the world at my own pace, in my own way. We cope in different ways. This is how I do it — with a walk in the park.