I got my booster shot on Monday, the 27th of December, and like the first two doses of Pfizer’s vaccine, I only experienced fatigue and soreness where the jab went. I am relieved.

I purposely timed my shot between the holidays even if I had originally scheduled for sometime earlier in the month. Friends and colleagues who had gotten their boosters earlier had reported fever and other severe reactions to their third Pfizer shot, so I opted to do it between the holidays when I was on vacation. The journey there wasn’t quite as clear cut. (Here we go again..)

First, there was the question of whether I needed to get the booster or not. A friend had advised that I find out if my antigen levels were high or low, and I dilly-dallied and pondered the matter. Frankly, I was iffy about going in for the test when whatever result showed up might not even figure in my decision to take the booster sooner rather than later. At the back of my head, I knew I was going to get it eventually. Then cases started spiking up again. Even before the news of Omicron broke, the question was hanging over my head unanswered for weeks.

Then when I did start looking for a slot, the appointment wasn’t that difficult to arrange. I had at least two healthcare related access points through the networks of the New York Presbyterian Columbia University Hospital and Northwell Health, through which I had originally gotten my initial vaccines. In addition, my neighborhood Walgreens, CVS and RiteAid were offering up slots. While others complained of scarcity of appointments, I figured out it was all a matter of going back in regularly to check when news slots opened. For example, Walgreens would offer up a few days at a time, close the portal, and then offer up new slots again, usually during Sunday to Monday. Northwell did the same. I was able to easily schedule 4 appointments which I ended up cancelling until I landed the date I wanted.

As the 27th approached, I was actually anxious to get it given the flood of omicron cases everywhere. I had taken to masking again even when outdoors, and had kept my sanitizer handy. I have been watching how the number of cases have soared, even with breakthrough infections among the vaccinated. I have been fortunate to have remained untouched. And so has my son. 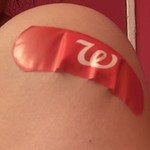 So I finally did it.  I took two extra strength Tylenols ahead to stave off any backlash, and whether that helped or not, I coasted through.

On our third year on this dance with covid, my hopes to travel anytime soon have been pushed back to the end of 2022. I am trying to remain cautiously optimistic. And at the back of my head, I’m wishing very hard that when omicron hits the Philippines, they are able to cope.

They are doing boosters there, too, now. We all do our best to try and beat the virus.

I had returned to work back in April, and have managed to come in 2-3x a week. With the tenacity of omicron, I’m hoping to reduce that to 2x if I can manage it. Just as we were beginning to think we could relax and move towards normalcy, we go back to almost wishing for stricter protocols to be put back in place. And they have been reinstated, although in a limited measure.

Fingers crossed and precautions aplenty, we start the year off hoping for better.