One of my favorite Catholic Christian songs is “Your Heart Today” by the ever so prolific and talented Fr. Manoling Francisco, S.J.  If there is one man who was put on this earth and given talent in abundance who has done more than his share to bless others, Fr. Manoling is that man.  And although the whole song is beautiful and truly touching, it’s the last line that has resonated with me the most:

“And when I’ve done all that could, yet, there are hearts I cannot move —  Lord, give me hope.  That I may be Your heart today.” 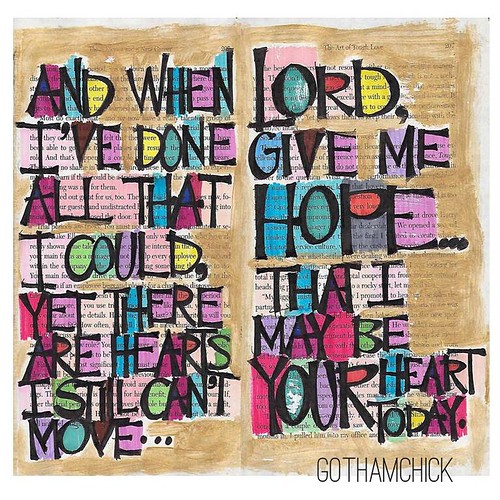 This layout actually appears in two separate pages in my altered book.  It’s a ways away yet but I put the whole refrain in separate pages.

A prayer.  Words of inspiration.  Between me and my God.

A source of strength and inspiration both in good times and bad.

There are things that I do online via Instagram, Twitter and Flickr which deserve a mention here but aren’t exactly front and center of my day.  Or sometimes there just isn’t more to say beyond the photo and whatever I had “scribbled” on to it.  For the most part, I do this only in prayer form, hence you will find a section on the above entitled WORDS & PICTURES as a page under a sub-category FAITH.

Below is my second entry.  I’m not going to do this regularly so I am just posting each graphic as they are created onto the page.   Please feel free to pin or share but please give credit. 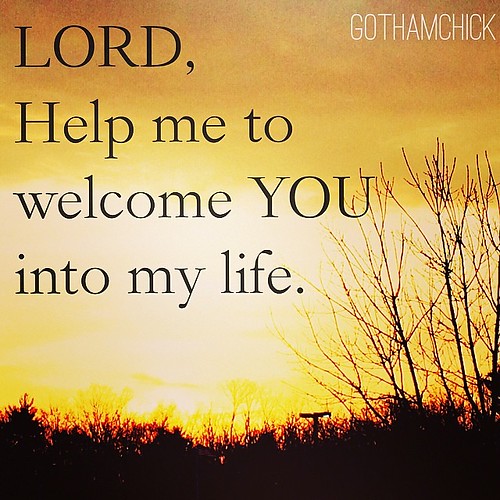 My “catch up” day is usually Monday, but because of the observance of Martin Luther King Day yesterday, I got a reprieve and had an additional day to laze around.

I don’t want to give a progress report on my list of things to do over the weekend because suffice it to say, I didn’t quite get anywhere with the list, but I did get to accomplish a lot. For starters, I have upped my list of items for sale in my shop from 8 to 24. (!) I had more to put up, but one thing about etsy listings is that timing, as well as volume, work together to increase a store’s visibility given the huge population of sellers and stores. So I’m trying to spread out the timing and volume of listings.

I didn’t get to bloghop much, but I did visit two or three favorite blogs this morning just to see what’s up with my usual reads. It’s not just to snoop around but sometimes, like today, I pick up a blog prompt or two. I don’t always leave a comment when I blog hop, often because I’m zipping in and out of a screen. And sometimes my thoughts are too long to leave as a comment, so I try to make it a blog post if I can.

I came across a young blogger currently in dire straights because of a choice of faith. I cannot say I empathize because I have been born and raised a Catholic and continue to be one, out of choice at this point, no longer by force of circumstance. I have always said that religion is a personal choice, and I have always been tolerant and accepting of other’s personal choices. I have friends who are born again Christians, protestants, agnostics and atheists. I always tell others that this open-mindedness is a result of having been subjected to a rather academic exposure to various religions as part of my 7th grade Religion classes with the nuns.

I live by the simple rule of thumb that I respect your choice of religion for as long as you respect mine. So the minute I hear that I will not be saved if I don’t accept your faith and beliefs, I tune out.

I have been fortunate to have had a solid Catholic education. Beyond the teachings of the Bible, I have had the chance to examine my faith against other religious beliefs, not to see that mine are better or the right ones, but to see the difference in the ways we recognize a higher power and show our devotion to our God, whoever He may be. I am trying to instill the same open-mindedness and religious tolerance in my son, more so since he is growing up in such a diverse mix of religious persuasions. Unlike his father and me, my son is in a secular school where religion is not part of the curriculum due to the separation of Church and state. He does go to religious education class, but there is only so much they can impart in almost two hours each Sunday and the succeeding eucharistic celebration. Still, I try. In my heart I wish he could benefit from the same religious upbringing that his father and I were blessed with in our formative years, but that was in another lifetime.

As a parent, we want our children to grow up nurturing the same faith in their hearts as we do in ours. But like most things, as a young mind starts to grow and develop into its own person, faith is something that we can try and help shape, but which in the end is a personal choice of the individual. I dream of having my son grow up to be a good Catholic Christian, but I cannot just wish that — I have to foster that and imbibe that into his life by being a good example of my faith and by teaching him about my faith. I cannot expect my son to go to Church if I don’t, so we try to go to mass more often now that he is cognizant of his responsibilities as a young Catholic. I try to teach him about Jesus’ role in our lives and why prayer is very important. I tell him as often as I can that I start my day by thanking God for giving me a son like him and asking Jesus to keep him safe and healthy always.

I have always said that there is only so much that we can control as parents, but those things that I can control and stir as his mother, I will do my best to keep a firm grip on. I know that when he goes out into the world and he hears about other faiths, he may choose another leaning. But I believe in my own resolve to teach him about my Catholic faith extensively to make his own faith steadfast — no matter what doubts or choices are put before him. I wouldn’t want to force religion upon him, but that is not going to be necessary if I succeed in making him love and live the faith I breathe.

I imagine it will not be easy for me to accept if he chooses some other body of beliefs to live by. In very elementary terms, we want to be sure we land in the same “heaven” or after life. But that’s over-simplifying things. But I always tell him all I want for him to be is a good person — in his mind and heart — and even when I’m gone, I know he will be fine.

Our personal choice as to how we worship our God comes with many responsibilities and challenges. It is no different from the disciples of old who were thrown to the lions literally and who were subjected to religious persecution. While wars helped to fight the advance of other faiths and fostered others to grow exponentially, as an individual, we are all tasked to take the humble route and bow our heads down in the face of dissent. Anger leads to hate — and no faith in its pure form fosters hatred. We have to live our faith with dignity and with humility — in total surrender. And part of that surrender is not giving in to hating others who do not choose the same faith as ours, even if they are forcing their faith and beliefs on us.

As a Christian friend used to say, sometimes it’s not always easy to do the Christian thing — but we have to go that way.

I have to admit that while I say I respect all faiths and ways of believing, I feel a tinge of sadness for those who do not have the faith to believe that there is a higher being whether he is the God I know or not. That is the essence of faith — believing that God is there, whether we see Him — feeling His presence even when we doubt. I had a Catholic friend in law school who invited me over to her house because the block Rosary was stopping by, and she didn’t know how to pray the rosary. I easily obliged, and I prayed. I feel blessed that He is a part of my life — and I want to give that gift to my son, too. I want to plant the seeds so that he may not share that agony of being torn between what he wants to believe and what I believe.

Because at the end of the day, my son is one reason I feel closer to my God. His very being and his pure heart has shown me God keeps me close to His heart.