Once upon a time, after I got my own sewing machine and had started taking actual courses in sewing at Mood University, I went fabric hunting.

I wanted to practice sewing but didn’t want to waste fabric I bought. I did purchase some pieces but found that there were occasional freebies on Craigslist and I have put together quite a stash.

From scraps to cut up bolts to boxes of spools of thread, I have managed to build quite a stockpile and all for free.

Well, save for the effort of lugging huge bags home, and the occasional cost of transportation (One was a pick up at a storage facility in Brooklyn which would have been too difficult and long a commute), they have literally been free.

So during this time when I’m sewing mask covers which I hope to contribute to some facilities in need here in New York, the free fabric has been a blessing. This has literally been a labor of love, but that’s for another post.

For those who know how Craigslist works, the freebies are strangely under “FOR SALE”. Because I don’t drive and largely because those giving them away were located in Manhattan, I limited my search to the area. (Yes, we do have a Fashion District.)

The first ad I answered seemed to be straightforward, as someone was giving away fabric scraps and notions somewhere in Chelsea. “Bring your own bag”, the ad said, so I brought a wheeled expandable tote. It turned out to be a small bag manufacturing operation owned by an old lady. She had reduced her operations drastically because of declining sales, and was thinking of liquidating her stocks. She had a writer who rented the small space for her factory for now and she wanted to prepare for an onsite sale. There were boxes of bag fabric scraps and samples.

In exchange, she requested me to help her do some heavy lifting to move some sewing machines and a table aside for the sale she was having in a day or two. I couldn’t say no to the old lady, so I lifted, and carried my very full and heavy bag home.

Much of the fabric from that stash needed washing because the sharp stench of glue reeked from some pieces that I left behind. It was an interesting haul, and a learning experience. The old lady wanted to go into online selling but knew very little about it, but she had a lot to share about pricing and merchandising. So besides the free scraps and samples, I got one on one mentoring on price points and her production method.

The second ad I responded to was from an independent designer who sold her own clothing label. She was into dyeing and had specified a pick up in Brooklyn. Her address was easy to commute to, so I ventured on my merry way.

She advertised for scraps and unused cut fabric, and again, a request to bring my own bags and totes. When I arrived at her apartment building, she had garbage bags full of the items she was giving away by her door. She even brought out more as she saw I had enough totes. I didn’t have the chance to pick and choose and took everything that would fit in my one giant tote and a giant roller luggage.

When I went through the stash upon arriving home, I was so surprised to see that she had given me cuts of fabric ranging from cotton to jacquard, in pieces as small as a quarter of a yard to 5 yards. I found the scraps of her dyed fabric very interesting, more so since I was experimenting with fabric beads and embellishments like roses at the time.

Last I checked on her, her label seems to be growing and she is now affiliated with a non profit that collects excess fabrics from designers to sell at a warehouse outside Manhattan. 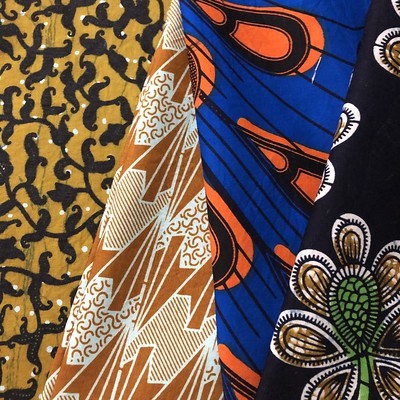 The third ad advertised for scraps and fabric samples. This time, it was a Manhattan based clothing label sold on its own website and carried by certain high end department stores. I walked up to their office which also housed their manufacturing studio. I didn’t get to see that because I found boxes of satin and silk fabric samples by thei receiving room. Her fabric samples usually meant a half yard cut. Some had multiples, so I was actually able to use two coordinating designs for my first attempt at a collared shirt. While that particular project didn’t result in something I could wear, it allowed me to learn and practice how to sew a standing collar.

There were “scraps” that were as big as two yards long cuts of satin fabric in different shades and colors. Material I can actually use for linings for skirts or the purses that I had started researching how to sew.

One of the treasures I unearthed from this pick up was a twill drape that must’ve been used as a curtain for a wall or a section divider. The fabric was double width at 60 inches and around 4 yards, and from this I was able to practice on cutting and sewing an overcoat or topper. It became a practice run and I stitched and unstitched parts of the pattern until I got the hang of sewing armholes and sleeves and sections of the front and back of a coat. 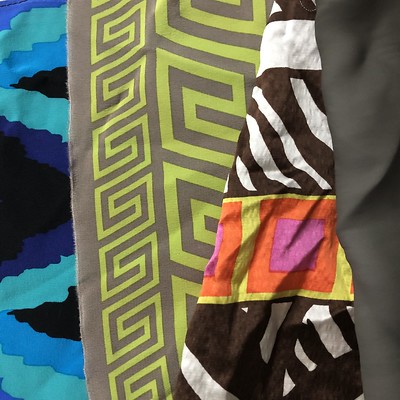 The fourth was another designer who had her own clothing line, again, carried by online consignment groups and in her own online store. She had two bins of scraps I could pick through. She dabbled in knit fabric and while there were no huge cuts, the scraps from her cuttings were big enough to work with. She also had a interesting variety of knit and novelty fabric I wouldn’t even look for in a fabric store, but which I would take a second look at, displayed in a store.

My next haul wasn’t at another designer but rather an established service provider to the apparel industry. I didn’t know it until I was at the workshop, because the advertisement was for bolts of cut fabric and assorted supplies.

They appear to have cut through bolts of 60inch jersey, leaving approximately 14 inches which was a lot — given that it was a bolt. There wasn’t much left when I came — but I still managed to get around 6 bolts in black and white.

The bigger haul was the boxes of spools of thread and other notions — there for the taking. I must’ve gotten around 50 spools of thread, and bunches of 9 inch zipper, along with a hodgepodge of assorted spools and reels of trim. I came home with a giant spool of what appeared to be quarter inch cording, a giant roll of half inch interface ribbon among a host of other finds. I actually had to pick what I would take because I could carry only so much in my totes and rolling luggage. 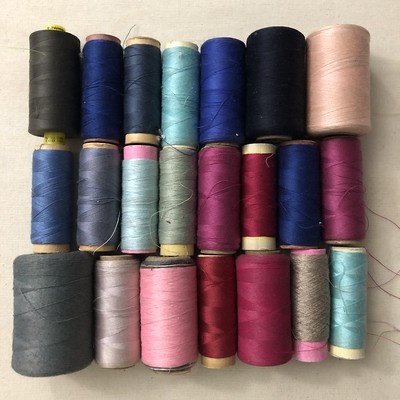 I envisioned the bolts of jersey woven into necklaces, and the guy who gave me the fabric sort of looked disappointed, as he told me this was high quality fabric! I haven’t had the chance to work with the jersey but now look at creating a hand knitted chunky jacket out of the bolts I have. (Maybe for next fall..)

The last one was an ad from a craft store in Brooklyn that was closing shop and had to vacate one of their storage rentals. The call was for 4pm and I though I’d arrive by 3, but apparently people had come early and started arriving at 2pm. There was still a lot to pick from and I grabbed a 6 yard cut of an African print fabric, for one, and several cotton yard long cuts for quilting. There were scraps of spandex in different colors and a dozen or so unfinished projects, ranging from fabric diapers to African American traditional skirts. Well worth the transportation cost back and forth. 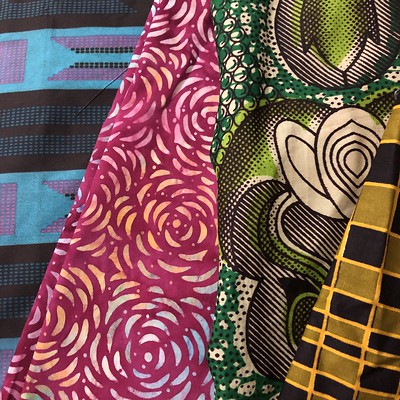 I haven’t been fabric hunting for a while now, largely because I don’t have any more space for it. I also want to start using what I have before I go and try to grab more. I’ve organized most o the items I’ve gotten, washing the scraps even, more so when they were full of loose thread and fiber. I’m asthmatic and I cannot work with that kind of extra.

I know, it’s about time I made good use of these freebies I have acquired in the last 4 years. I also know I cannot go out looking for more, specially at this time that we are all social distancing. But I’m taking stock.

I have joined Sewingforlives.com and have started sewing mask covers per their specified template. All the materials I have used so far, have been from these fabric hauls. I am well stocked to do dozens and dozens more. I am not setting a goal but just plan to keep sewing during my free time. As I work full time during the week (even if from home), my progress has been slow. The point is, I’m getting there, and my fabric haul is being put to good use.

This, plus the project to create face covers for my personal use for when we return to work. My goal is to have enough to use one daily for a 2-3 week laundry cycle. I haven’t quite found the fit and pattern that works for me so that is a work in progress. I’m concentrating on my donation of mask covers first — and that’s taking up all my free time for now.

I am slowly honing my sewing skills with this freebies, and for a good cause at that.