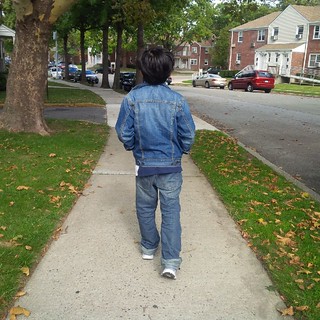 I took Monday morning off from work to join my 10-year-old in school because it was Student Organization elections.  He was running for Vice President which was one of the two positions alotted to fifth graders like him.  He had run for Secretary last year but had not made it past the class eliminations, and he took that loss with a grain of salt and said it was okay.

This year, he made it past the class eliminations and was one of 4 candidates (2 from each fifth grade class) vying for the position.  Of course, I was the proud mom.  I created flyers and posters which, unfortunately, we were not allowed to use.  (” Mrs. G, it’s not fair for us to allow your son to use professionally made posters — it puts the other kids to a disadvantage, ” I was told… no flyers either, because the other kids didn’t have any of them.)    The father was up in arms arguing that his son was ‘thinking out of the box’.  Me, I just stood back and enjoyed their enthusiasm for the school elections.  I’ve been through a couple of those in my day, and I was just the one pulling the outfit and the props together.  Father and son worked on the speech.

Election day was Monday, the 3rd.  Unfortunately for the Dad, he had to fly off to a conference in Vegas.  I hied down to the school, took my seat, whipped out my iPhone when his turn came and shot the video.  He was one of only 2 male candidates in a total slate of 16, looking dapper in his suit jacket.  I warned him not to flip his hair for the girls, something I was told elicits some giggles when he does.  (My son, the heart throb.)

When I came in, his buddies all waved at me and assured me they were voting for him.  Even the girls from the class.  Our biggest stumbling block is that one of the three girls he was competing against was one of the popular girls.  (Who, incidentally, was “his first” — girlfriend, that is — in kindergarten, until she smacked him in the face. LOL)  Well, popular girl won.

I got a call at the usual hour when he gets home, and my first mistake, I think, was that I asked, “Do I have a Vice President?”  Then silence.  And there was silence and sniffling for maybe the next 3 minutes.  I put on my mommy hat and went on to try and comfort my little guy.  I reminded him I had warned him about the possibility of losing, to which he always said he was finewith.  Disappointment can be such a heavy burden to bear, more so in a competitive exercise like an election.  Winning can be euphoric and intoxicating — I’ve been there.  But losing can cut through the heart, and I’ve been there, too.

I was at work, and he was home.  I didn’t know how to comfort this young heart as I heard it breaking.  He called again a few minutes later, and there was 5 minutes of silence — tears were flowing on the other end.  Nothing I said seemed to make a difference.  So I just let him cry.  It’s one of those moments when you wish you could whip out something from your magic hat and make everything alright.  I asked him if he wanted something special for dinner, but he just said he didn’t even have an appetite.  (Mom’s heart breaking again.)

I reminded him he had said he would be fine if he lost — but he told me between sobs that he thought there was a chance he would win, and he really thought he could.  In all honesty, I did, too.  But I’m the eternal optimist.  Hearing him crying on the other end of the line made me wonder, though, if I should have tempered my optimism with a little more caution against losing to help him deal with that possibility when it happened.

For all the tears shed, I am grateful for the lesson this whole exercise has taught him.  Sometimes we try to protect and shield our children from the evils and pains of the world — but there are lessons that they must learn on their own if they are to make it in the dog-eat-dog world out there.  Disappointment and loss are two things that are very hard to deal with even for us, grown ups.  Even in small doses, they can be tough on a 10-year-old’s heart.  But they must be dealt with, they must be experienced.  They have to be faced head on, because in life, there will be bigger disappointments and losses.

He’s okay now.  We even shot a video of him “serenading” me with Minnie Ripperton’s “Never Existed Before”.  He gamely sang falsetto (!) and danced as he performed knowing he was being filmed.  I was so surprised he knew most of the lyrics, but then, I shouldn’t be given I play that song over and over again as a pick-me-up song in the morning.

Another life lesson learned.  Taking off my mommy hat now to get to the city and go into my “other” job.

..for the lives cut short.

.. for those who were left behind to suffer the loss now and to their last breath.

.. for a town scarred forever by this heartbreak.

..for those parents like us but who were not as lucky.

“Those we love don’t go away,

they walk beside us everyday.

Unseen, unheard but always near,

If you want to see more of my Art Journal, please click here, or you can always choose my Art Journal Every Day page from the list on the top left of the blog page.

I invite you to view the Flickr Group dedicated to this endeavor by clicking here, and be inspired to create your own art journal.  (Artistic talent optional.)

Mondays are a natural “alarm clock” for me to visit my blog dashboard and I’m reminded I haven’t been here all week. It doesn’t help that my (outdated) browser keeps giving me a “bad gateway” whenever I try to start a post. *sigh* But I am trying not to let that get to me as I want to get on with my week on as positive a note as I can manage. While “Happy Monday” doesn’t quite sound as nice as “Happy Friday”, we all need a little bit of cheer as the rains greeted us when we walked out the door.

So I am wearing a splash of color today despite my all black main ensemble. I have a silk orchid clipped to my fuschia pink short sweater which definitely brightens up my “Lady in Black” drama. I am trying to carry my period of mourning as far as I can. So far so good. Part of me is still coping with Dad’s demise. I still have more thank you notes to write — but the important thing is I’ve started writing them. I haven’t quite gotten to starting my scrapbook about him, but I have started gathering photos that I have on hand. Over the weekend, I pulled one of my empty fancy storage boxes from my closet and put the baseball cap and handkerchief that I took from his things. I will put my letters and his letters to me there, too. It’ll be within easy reach should I feel the need to touch them and feel them again.

I still catch myself thinking of him when I see something I would normally pick up in the grocery or at the store to send to him. Then I have to remind myself he’s gone. I’m still taking it a day at a time. Remembering Dad still gives me pause to just take it all in., but I try not to let the feeling linger, because it’ll bring back the tears and the pain again.

I have never quite suffered a loss like I am going through now, not because I hadn’t lost anyone as dear, but the circumstances behind Dad’s passing were quite emotional and more complicated. I lost my favorite grandmother at age 7, and a favorite Aunt who was like my second mom at age 23. Both were sick and while their passing was expected, their death left me with a numbing loss but not the one that came with as much pain as that which I am feeling now.

In time, I know, I will come to terms with the unanswered questions, and while the feeling of loss will never be totally gone, I am hoping that the pain it occasions in my heart when I think about him now will eventually subside.