Everyone who knows me knows my world revolves around this little guy who has been the love of my life for the last 10 years. From the moment he came out into this world, my life was changed forever. Although I would discover later that it had changed even more than I had perceived, and it appears that his entry into my life had caused a drastic change in other parts of my world I didn’t even see, I would not trade his being a part of my life for anything else. No matter what challenges I have faced or am facing, knowing I have him in my life changes the face of the game.  I look at him and I know I’m in a good place.

I pride myself in teaching him to be outwardly affectionate and expressive of what he feels.  It’s not always easy and he is not the same way with everyone else, but that has given me precious rewards like a poster with scribblings of various declarations of love for his Mommy. 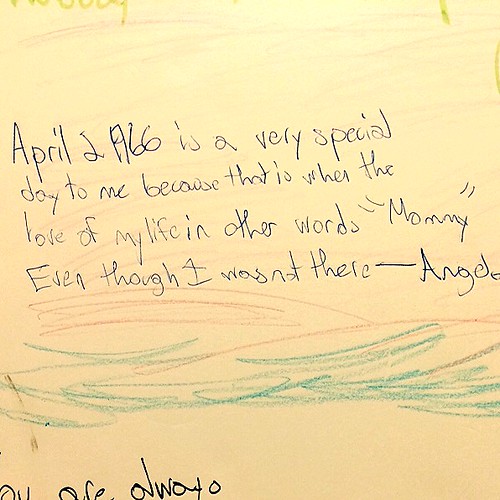 So forget that he missed out on a word or two — I get the point.  Unfortunately, my son didn’t inherit my penmanship but I’m not complaining.  And for my son to know my birth date and birth year shows my History professor-to-be has a knack for dates like I used to at his age.  (Dates and phone numbers were easy for me, just don’t make me do Math please.) 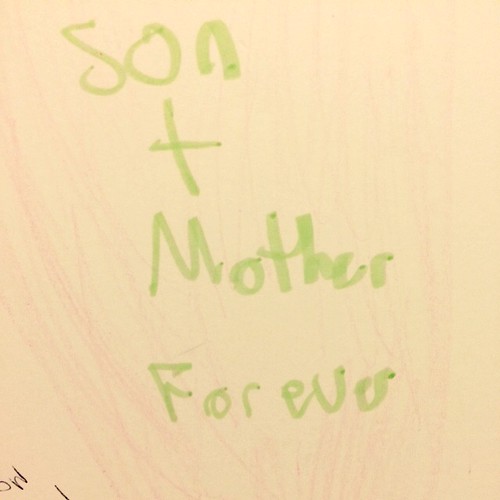 Naturally, the Dad was jealous as can be, but the boy told him there was only one poster board.  (We shall scramble for another.) 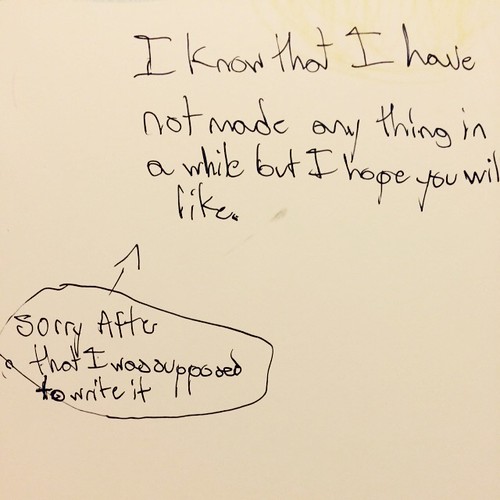 I like these little surprises he springs on me — for no reason at all, except that he thought of it one afternoon.  I wish I could frame the entire poster but it was half a sheet.  So I took snapshots instead and might frame one of these.  I have a knack for keeping his scribblings and projects — and even at just 10, he marvels at my memory box which contains a lock of his hair, his belly button stump, his first onesie, and all that stuff.   When I can, I incorporate his works into my art journal. 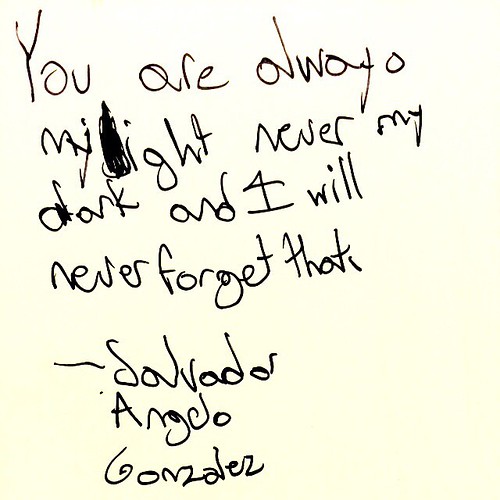 A friend on Facebook commented the above was so eloquently said.  I couldn’t have phrased it better.  I am proud that my son’s heart has the eloquence to show what it feels — and I am heartened as that bodes well for him when he grows up.  That’s a precious gift that I hope I can continue to nurture.  One day, he will love others — and I want him to be able to express that love the same way he has expressed his love for his current “love of his life — his Mommy.”

Children come into our lives and we are never the same again.  After two miscarriages, I was almost ready to accept that I would not be given that precious gift until he came.  My pregnancy was very challenging with gestational diabetes and all, but when he came out into this world, I forgot about all those challenges and focused on this new life I gave birth to.

He is the reason I am still around, and hope to be around for years to come.  I look at him and I see that I have been blessed.  Forget about the heartaches and the disappointments — he makes it all worth it.  He alone makes the negative seem trivial compared to all the joy he exudes and the love he gives.  I reach out to touch him and I feel an overwhelming reassurance that everything will be okay.  I know his love is like no other. 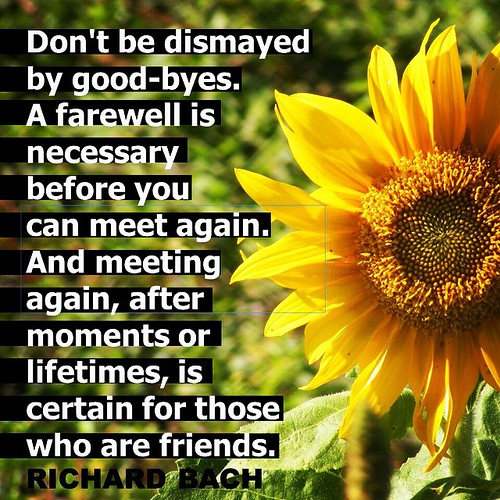 I was actually meaning to add the story to this blogpost later, but I am having such a frustrating time trying to put the pictures up online without it looking like it’s all skewed.

It was a productive weekend indeed with three finished entries, and I just realized today that I actually have 14 hearts now.  Halfway through at the end of the month. HA!  I might yet get the 28 done quicker than quick, and move on to the next phase of our Art Journaling sojourn.  Or should I say, MY Art journaling sojourn.

Still on the theme of hearts and love…

LOVE done in simple wordart (via Microsoft Word)and printed in ultra light and fine grey.  Putting a heart in the background was an afterthought, but I think it came out nicely.  I had done it by hand and then filled in the spaces with other tiny hearts.

I’m actually doing a series of this four-letter sheets, one of which was a collaboration between me and my six year old son.

Here is another “template” I’m working on producing varied layouts of which started with the heart and the smaller square frame around it.

I am currently working on another one with a different phrase in the center.  This one simply says “Thanks” rendered in my own handwriting.  I simply drew  lines from the middle frame to the edge of the 8″ x 8″ square and then filled them in with different designs.

At this point of my zentangling adventure, there are certain patterns I’ve grown fond of which you will see in my various works, and some which continue to evolve.  Always, though, there is at least one pattern or design that I try out with each new piece fort he first time.

There is also a conscious effort on my part to try to avoid putting straight squarish patterns next to each other, trying to alternate instead between the round and curved to the straight and defined lines.

Love as a 6-year-old knows it

I am always excited to think up of projects to do with my son, Angelo, and I told him I had this sheet I wanted him to color so I can put it up online again. After he colored in the wordart, I defined the letters using a permanent marker and simply put a border around the frame.

Watching the Oscars while finishing this, one of the acceptance speeches made me gush and I decided it was apt for this particular piece. Around the border I wrote: “You are my dream come true…”

I surprisingly didn’t wake up unil past 8am this morning, and I whipped up some banana pancakes for Alan’s breakfast.  (The little tyke had some nuggets with rice for breakfast already.)  I simply mash a banana and mix it in with a cup or so of the  complete mix (I use Aunt Jemima’s).  After enjoying mine plain, I picked up my cup of coffee to get me started with my day and I started to write a post here.  I didn’t get too far, but I did get a few things done.

It was one of those Sundays which saw us spending the day at home, and yet it was one of those that made you wish it wasn’t Monday yet.   I managed to photograph and post some items in the shop (Halleluia!) — and on Flickr where I keep a set of the photos I use to sell my items.  Since the photos are of the items listed for sale themselves, the page disappears when the item is sold or when it expires, so I am archiving my photographs in a folder on Flickr.

I didn’t get any of the letters or cards I meant to write done — yet.  Maybe tonight.  I got an e-mail from my brother Nikky which has convinced me I must sit down and write that e-mail to my cousin who is a pathologist about a question that’s been in my my head for weeks on end now.

I was saddened to hear, too, that he had a friend who had tried to take his or her life but didn’t quite succeed, only t o succumb to the injuries the attempt left him with two weeks later.  The girlfriend of someone I know who struck me as a simple yet kind hearted girl had also tried to take her life at such a young and tender age, but she thankfully, did NOT succeed.  And there was the news of Cesar Montano’s son having taken his own life.  I can’t help but wonder what desperation had driven these people to do what they had done, and to inflict harm upon themselves like they did.

I have had my own lows and points of despondency, but it never crossed my mind to hurt myself or end it all.  Perhaps it is because I have been so blessed with the love of family and friends that it has never even been an option, and I have a fear of God to know that it is the wrong thing to do and will not solve any problems.  I do not condemn them but wish that they find peace as they go to the next life.  I wish that young girl who tried sees that there is always hope and there is so much to live for.

And I think about the many people who continue to fight to live — who, despite the odds, cling to their faith that if it is His will, they will see another day.  A former high school batchmate of mine who is a prominent showbiz figure although she herself is not in the movies has battled cancer publicly, celebrating yet another birthday.  I saw her Facebook status thanking God for another birthday.  I used to think she was the one who had it all.  This is one woman who has travelled the world over many times beginning when she was but a little girl.  Her Mom was known to be a shrewd business investor enabling them to live very comfortably, and even in married life, she found the man of her dreams who she fought for in spite of her mom’s vehement objections.  She has remained married to this man and now has such a beautiful family — it seemed picture perfect.  And yet life dealt her a blow, but she rose up and fought on.

There is Franz, a young man I’ve never met but whom I consider a long-lost inaanak or pamangkin.  His family and friends waged a financial and physical battle to help him make it and he did.  Latest scans showed he has been clean and we continue to pray that he continues to grow stronger and grow up to raise his own family in the not so distant future.

They continue their fight.  So I wish those who find themselves in despair to the point of giving up hope.  I wish they see it and grasp it in their hands so that they, too, may continue to fight to live, battling whatever demons they may find in their minds.

Dinna’s Diner is coming to a close.  Pancakes and bacon for breakfast, pork giniling and a side of plantains for Alan’s lunch and tortang talong for the veggie fix for my mother-in-law.  Tonight it’s round two for the giniling for Alan and a fresh batch of nilagang manok for the biyenan. The little boy?  He had nuggets and he’s having some pasta tonight.  Dinner is served.