It’s a few minutes past 6am and I have another 15 minutes to let the color mousse in my hair set in — it’s one of those mornings when I have to multitask between breakfast and other routines.  So I thought I’d sit here and write a post in the meantime, and since my brain is still in weekend mode and unable, as yet, to write a full post, let’s do our Monday Musings bit: a collection of snippets I pull together on Mondays.

A good breakfast is having a favorite treat: like giant sesame balls.  I just love sesame balls — or buchi as we call them back home.  I have an Asian grocery a short drive away which has a bakery in house which makes them in this humongous size.  As in tennis ball size!  The only problem is that the Sunday lunch crowd usually grabs them early on, but I was there around 11am yesterday and I managed to get 3.  So I had one for lunch, another for an afternoon snack/part dinner, and one for breakfast today.  Yummy!

So to keep on my weight loss journey, I always switch a treat for a meal or make up for it with extra physical exertion.  That way, I don’t overload on calories and sabotage my fitness goals.  I’m a little disappointed I have plateaued yet again, but I am proud to say I haven’t gained weight despite the occasional indulgence.  This, of course, means that I will have to go on the “shock phase” of my diet yet again to regain my footing and hopefully break through the plateau I’ve hit.

I am thankful for another week — even if they said we’re expecting rain and snow yet again, specifically today.  Everyone back in Manila and in most parts of the world which don’t see snow are so awed by it.  It IS quite a sight when it is falling, more so when it’s a glowing sky above and the snow starts to really accumulate in a thick coat on the ground and everywhere else.  Until you have to walk under it and get to work in the slush or slippery ice. And worse, when things like your iPhone falls on the soft snow and you don’t even hear a thud.  (And it is never returned to you, of course.)

Yes, I lost another phone — and I’m waiting for the replacement.  It’s back to the good old reliable blackberry for me, in the meantime, which I carry anyway as a backup.  The iPhone 5s was on the Good app which was good, but which had to be prompted to refresh unlike the blackberry which keeps refreshing as the mail comes.  The good news is, I’ve been told that the iPhone 6 actually runs on Outlook which should be much, much easier.  (We shall see.)

Again, I hate the hassle of losing almost 2,000 photos on that phone, just when I was about to back it up, having learned from losing thrice that much in pictures the first time I lost one.  (Lesson learned!)

It is heartening to see France uniting against violence in the midst of the terrorist attacks of last week.  I didn’t quite see it but heard about it in the news, and I am sure that the newspapers will be awash with coverage of the weekend demonstrations with the French coming together to show their solidarity as a country sans religious distinctions.  That, to me, was a triumphant declaration that violence will never be tolerated, and that there is a lot of good in humanity out there — no matter how deep the hatred may lie in certain factions of society.

It shows me there is hope that peace will prevail, and that the hand of violence will always be slapped down shackled, if need be, by the voice of the majority.

Of course as a New Yorker, I cannot help but fear that the same things might happen here.  I hope not.  Let this be the one and only incident of such a nature.  That is my prayer.

Well, time to get ready for work.  I hope everyone stays safe.  Let’s say a prayer for those who lost their lives on both sides in the tragic events that occurred in France last week.  Paris is, and will always be, one of my favorite cities.  I hope to one day go back and walk your streets again.. 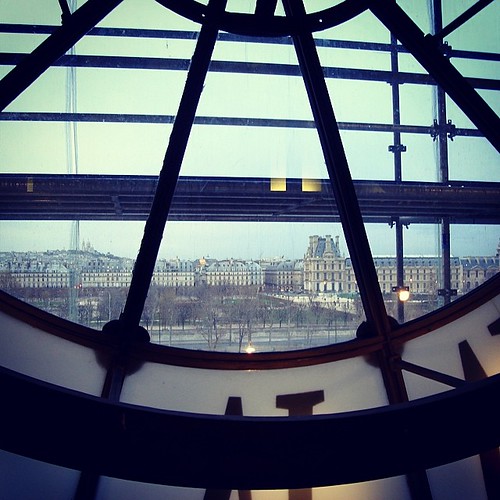 One of my favorite shots of the Louvre from one of the windows outside the clock of the Musee D’Orsay.