I attempted a blog post last night to no avail. After a third time where I hit the delete button for the entire post by mistake, I figured the post was just not meant to be. I’ve been trying the dictation feature in writing my past, and I’ve had mixed success. It takes some getting used to.

It’s not entirely all dictated, because the feature still requires actual editing. I’m trying to see if it can keep up with the speed at which I speak, but I am realizing that I am actually talking slower hoping that the phone keeps up with my accent and my words. Sometimes, I catch it thanking and probably wondering what it was that I said. Given that I speak with a slight accent but still with a twang, I figure I have to give allowances for the software or the technology to get used to me as well.

So it’s just another day.

7:30am. My alarm rings and I grab the phone to turn it off and I scan my inbox. Force of habit. On a regular day from not so long ago, my alarm is set almost 2 hours earlier at 5:45. I do my morning routines and get changed. I decide I will take a shower in the morning like I always did, instead of before bed which is now an option. I have a video call at 11:30am today with an external office as a test for a call with the boss. I actually need to put on a face.

8:45am I am ready to start my day and I log on. Soft token spews out the 8 digits that change on a cadence and I am in. This is my virtual office and my day begins.

10:15am. I am reminded I have a video fest call before noon. I put the lightest of make up to look presentable onscreen. I had to look for my lipstick and just put a hint on. Just a little eyeliner and then I dabbed some powder on. I am used to full make up at work — it has always been part of dressing up for me. Since the shelter in place order took effect, my skin and my hair have been given a major reprieve from the daily abuse I usually subject it to.

The call goes well but there might be issues. I need my IT tech.

12nn. I make a deliberate effort to “observe” my lunch hour, whether I actually grab a bite or not. It doesn’t matter that I stay in front of my laptop continuing to work, but I refrain from sending emails unless it’s the boss. I want to be respectful of other people’s lunch hour as well, and I postpone replying or writing until after 1pm. Even when I was in the office, I tried to keep that hour free of reaching out. I might be working at my desk or otherwise handling something, but I will not call or write anyone until after the hour is over.

I wake up the 16 year old and he grumbles a request to stay in bed a few minutes more. Yes, I know, they are on a modified schedule, and their online learning has been pretty much at their own pace, but I don’t want him to lose the structure of the day. He saunters into the living room half asleep. I have to remind him three times to eat breakfast, offering lunch. He grabs his bowl and milk and cereal. At this time I start asking him what he wants for dinner. (I like defrosting in the fridge and the sooner I bring whatever item I need from the freezer down, the less fuss it will be later). He wants a steak. Simple enough.

I’m making bread pudding today. I have researched several recipes and had hoped to do what my mom used to make based on Nora Daza’s recipe. I was ready to go until I saw that it meant double baking (baking in a pan of water). I wanted to make the simple version and landed on this recipe from the New York Times.

I’ve been setting aside the top and bottom slice of my bread loaves since I started eating bread again, and I’ve collected enough to make two batches. (I keep them refrigerated.). One batch down.. I must say I am happy with the way it came out and I will look to tweak the recipe later with raisins and flavoring. 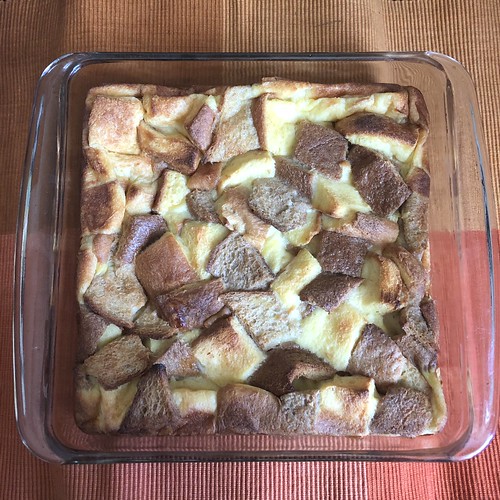 Mixed and baked within the lunch hour, I let it cool another half hour before I sliced a piece for lunch. Meanwhile..

1:00pm. I get back to work. Scheduling can be as easy as one email exchange or twenty. Sometimes technology doesn’t work like we expect it to and there are explanations and calls to be made.

I needed my white glove support for IT to report and hopefully resolve an issue. He is one of my closest friends at work and we say hi and catch up and have a few laughs. Even if (and all the more because) he is a friend, I requested for a call after 1pm. Matter settled, second test call scheduled.

The afternoon moves with more emails and scheduling maneuvers. When you manage a calendar as busy as the boss has, there’s a lot of wheeling and dealing to make it work. Sometimes it gets too tight and everyone is unhappy, but I think I do a pretty good job of managing her days well.

4:00pm. I have to remind myself the day is almost ended, and the emails that need sending must be sent within the next hour. I also start writing my daily wrap up to brief the boss on the following day’s schedule. If we were working like we used to, I would hand her the day’s calendar with all background information and prereads printed. Since this all started, the summary of the following day’s meetings and today’s meeting requests or scheduling progress have been an efficient alternative. I start my draft so I can hit “send” before 6pm.

5.49pm. Recap sent. Officially logging off and off to my second job: Morherhood.

6:45pm. Time to cook dinner. My son and I have taken to eating dinner together while watching one of our favorite comedies. These days, we’re going through the last few seasons of That 7″s Show. He wanted a steak tonight, and I had more of my callos, then pudding with white chocolate chips for dessert. (I microwaved if for two spurts of 30 seconds to soften the chips. Heavenly!)

9ish.. “Me” Time. I go and do the things that relax me. I press my masks and start top stitching a batch. I am still undecided about the ties, so none are technically ready to go. My cord locks finally arrived. I really shouldn’t complain because I got them cheapest at Walmart, even if it was sold by one of their consignees.

Midnight. I call my siblings who are with my mom and I say goodnight to all of them. It’s a quick call as they are having lunch and I want to go to bed. I like that info this daily now because they are all quarantined at home and can pick up on their smartphones. I drink my vitamin D, freshen up and sit on my bed in the dark finishing this post.

Soon, I will be choosing my sleepcast and drift away to lala land.

Another day ended.. another one beginning in a few. I bid you goodnight.